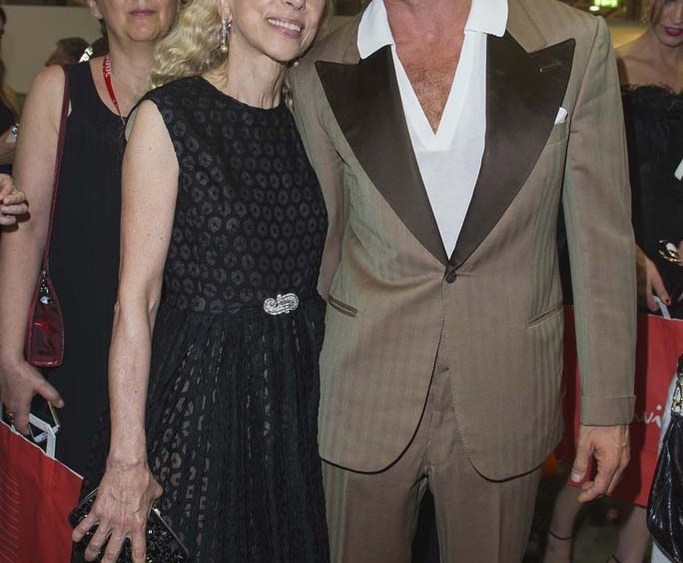 MILAN — “They still love me. I guess it’s because I am a simple person and they realize it. In the end, the word spreads that I am kind and friendly,” said Roberto Cavalli with a shrug, referring to the fans who elbowed their way toward him for selfies at the gala dinner Thursday to open the biannual AIDS fund-raiser Convivio.

Cavalli was one of a slew of designers to turn out at the event. The reserved and press-shy Ermanno Scervino, whose friendship with Kanye West landed him more than a few tabloid stories, coyly revealed he is the one who showed the 16th-century Forte Belvedere to West for his wedding to Kim Kardashian last month. Scervino also opened up his atelier in Florence to West to help him fine-tune his designs. Scervino’s verdict? “He is talented, I like him.”

Flanked by Convivio organizer and Vogue Italia editor in chief Franca Sozzani and model Eva Herzigova, Lapo Elkann was fresh off his speech at a luxury summit in Milan a day earlier. The entrepreneur said he carefully handpicks these conferences. “I am not and don’t want to be seen as a know-it-all,” he said.

Alberta Ferretti, accompanied by her brother and executive chairman of Aeffe SpA, Massimo Ferretti, arrived wearing a cast on her arm embellished with a flower pattern that mirrored a print on her black dress. “I wanted to be a bit eccentric,” she joked of her accessory — required after a recent fall on the street.

Several young designers turned up, including Marco de Vincenzo, Gabriele Colangelo and Fausto Puglisi, who paid homage to Gianni Versace by wearing one of his vintage shirts. There were also Casamadre’s Alessia Crea and David Parisi; CO|TE’s Tomaso Anfossi and Francesco Ferrari, along with handbag designer Sara Battaglia, who said she has just launched her own online store. A line of bags is also in the pipeline for jewelry designer Carolina Neri and Bérangère Lux, who founded the CA&LOU label in 2010. “We are planning a big event for September, where we will launch our first capsule collection of evening bags,” Neri said.

Genny’s new creative director Sara Cavazza revealed that the brand will launch a new fragrance in September, which will be produced by Italian perfume manufacturing company Italart.

Table settings at the dinner on the second floor were interpreted according to the theme chosen by Convivio: “Fantasy.”

The sweltering heat hitting Milan wasn’t only one of the night’s main topics of conversation, but also served as inspiration for Byblos creative director Manuel Facchini. “To fight the heat, in July we are launching a clothing capsule collection decorated with prints of glaciers re-elaborating satellite imagery,” he said.