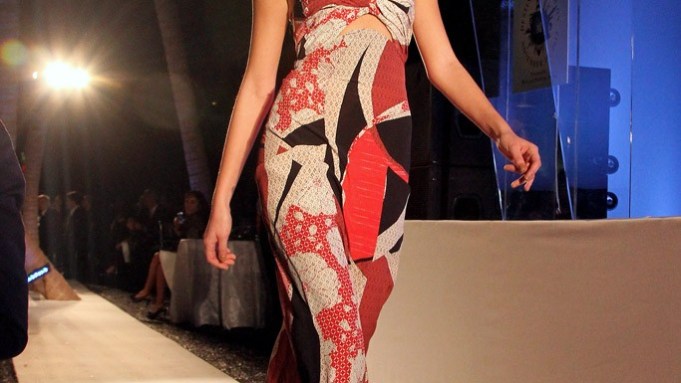 MIAMI — Long before Fashion’s Night Out, there was Destination Fashion, a biennial blowout at Bal Harbour Shops for the Buoniconti Fund, the fund-raising arm of the Miami Project to Cure Paralysis. The center and tenants close early to the public, while boutiques remain open long past regular hours so big-ticket guests can shop and party the night away.

Saturday’s seated dinner for 1,900 was held amid the property’s signature, swaying palm trees for the first time, during which featured designer Pucci presented its spring collection. Creative director Peter Dundas, who has steered clear of outdoor shows ever since his initial attempt was nearly thwarted by rain, was relieved the weather cooperated.

“I also nearly had a heart attack when I saw the size of the runway, the largest I’ve ever shown on,” he said, somehow scraping together enough models to get the job done. “This collection’s strategically placed transparent panels were an opportunity to show Miami, which is a very strong market for us, a more subtle side to sensuality.”

Tom Brokaw, who’s been involved with the fund for nearly three decades, led the ceremonies along with presenters Micky and Madeleine Arison, and honorary co-chairs Nacho Figueras and Delfina Blaquier, and Tommy Lee and Dawn Jones, who made it just in time.

“Dawn was in an out-of-state polo match and unfortunately for us, won. Thank God we found a donor to fly them in on his private jet,” said event chair Stephanie Sayfie Aagaard, adding the event raised $31 million.

Guided by Brazilian dancers and drummers, everyone arrived at the separate ticket after party that started in Neiman Marcus and ended in Saks Fifth Avenue. As the international hit single “Gangnam Style” blasted to a packed dance floor and real flamingos frolicked, a relaxed Stanley Whitman, the nonagenarian founder of BHS, surveyed the scene.