Carmelo Anthony, Miguel, Thom Browne, Stefano Pilati and Gildo Zegna were among the guests who turned out for the two events.

By Paulina Szmydke and Alex Badia on June 21, 2015
View Slideshow 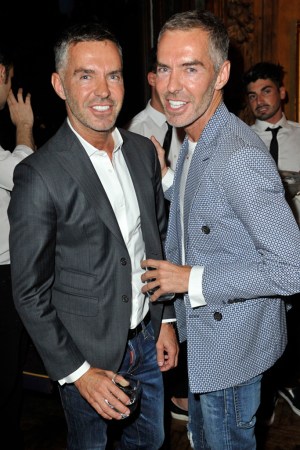 IT’S A MAN’S WORLD: It was a night for magazine parties in Milan on Saturday as Details marked 15 years under editor in chief Dan Peres and GQ celebrated creative director Jim Moore’s 35 years at the magazine. The two parties had designers, top retailers, celebrities and press shuttling between the two events.

GQ took over Atellani House, Leonardo Da Vinci’s former home, where Gildo Zegna marveled at the decor, explaining that this is where the Renaissance Man painted “The Last Supper” for the Santa Maria delle Grazie church across the street.

“You can discover another Milano inside Milano. Outside it’s very boring, inside it’s beautiful,” said Giuseppe Zanotti about the city’s oftentimes challenging architecture.

Thom Browne said he enjoyed the challenge of finding the proper location for his shows amid the town’s fascist architectural sins.

“I have so many crazy ideas — some of them nuts, some more appropriate than others,” Browne said. The fact that he is overseeing so many different labels, “helps flex the muscles of creativity,” he laughed, adding: “People think it’s intellectual, but it’s really instinctual.”

New York Knicks forward Carmelo Anthony was striking a pose in the palazzo’s study. “I’m trying to get these guys to put me on the cover. I’m gonna go work Jim,” he joked, sporting Zegna Couture.

Anthony, who came with his “pal” — the brand’s creative director Stefano Pilati — said he was in the midst of preparing a creative collaboration with the label, but kept mum about the small print.

Grammy Award winner Miguel cared enough to change twice that evening, citing Costume National as his go-to label for all occasions. “It’s a match made in heaven,” he said, before taking to the stage in Da Vinci’s former vineyard to perform new tracks off his upcoming album “Wildheart,” due to hit stores on June 29.

“We are all wild at heart if we know what we want, what we believe in and stand for,” he said of the title. “In that way it may seem wild to society, but we are just living our purpose,” he said, also quoting Aristotle’s “Excellence is not an act but a habit,” which he had tattooed across his chest.

Moore said: “It’s a completely different climate from when I started in the Eighties. It came off the Studio 54 era, when it was very flamboyant, a peacock era. Then in the Nineties all turned minimal, with a lot of question marks on the guys’ minds. Now we have to give guys credit for how they are piecing it all together.”

GQ’s publisher and chief revenue officer Howard Mittman noted what has also changed is how men consume news about fashion. “Revenue will be about flat for our print edition this year, but digital is up 44 percent. Web video revenue is up 200 percent,” he said, revealing that GQ.com would be migrating to a new CMS in the summer, before getting a full redesign by fall.

Across town, Peres was humble about his role at Details. “It’s not rocket science, it’s lapel wit,” he offered. “We are not saving the world here, but it’s rather refreshing that men have tastes of their own. It used to be about how to match shirt and ties, now it’s: ‘This is a new lapel you should be considering, or hey, pleats are back,’” he said, citing the narrower silhouettes as “the single greatest development in the course of the last 15 years.”

“There was a time when the American man would freak out when clothes touched his body, now he wants them to be touching [him],” he observed.

Details’ next cover will feature Jake Gyllenhaal, who, according to Peres, is in amazing shape. “He is supporting [his new film] ‘Southpaw,’ where he plays a boxer. He looks awesome,” Peres teased.