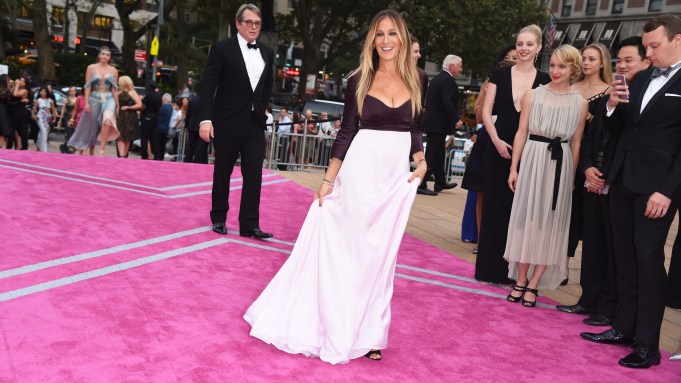 “I can’t even touch my toes, much less do any of that,” Jenna Lyons marveled over dinner at the New York City Ballet’s fifth annual fall fashion gala.

The evening’s cocktails, performance and dinner were attended by the likes of Diane Kruger, Taylor Schilling and Sarah Jessica Parker. Contrary to what many of the room’s fashion folk are accustomed to, the costumes on view weren’t to be measured by their retail success, Instagram likes or live-stream metrics — they were made entirely for the stage. Designers said these freedoms made the project that much more appealing.

“I’m really proud to be a part of tonight, for me it’s really important to remove a designer’s ego from the stage and let the dancers shine and let them move. Ultimately, you want to see them move and their bodies move — that was my mission,” said Rodriguez, after his costumes for principal dancer Lauren Lovette’s choreographic debut had made their gala premiere.

“I really like thinking about the functionality of the garments and how they interact with the dancers — what I do to outfit the dancers affects the total piece, it’s a big collaboration and that’s the part I love the most,” said past fashion gala participant Humberto Leon, who has enjoyed a steady partnership with NYCB resident choreographer Justin Peck since their initial tie-up in 2015.

The scene elicited envy from Lyons. “I love the collaboration with designers — it makes me want to do it. I’m putting my name in for next year. It would be so much fun….I want to do color, stripes, wrap dresses,” she said.

Parker, a City Ballet patron, organizes the event each year — performing the role of costume matchmaker by selecting designers to suit each choreographer’s taste.

Parker attributes dance’s rising popularity to dancers’ aptitude with social media. “The most recent generation of dancers were really silent figures, not only on stage but they were not people we knew a great deal about outside of their professional work. I think a combination of things happened and allowed for them to kind of share with us who they were. Social media, it’s their first language — when they wake up in the morning they are talking to us about their professional lives and their day, and now we have a better understanding what is a dancer’s life,” she said.

Two of those young dancers — corps members Indiana Woodward and Alexa Maxwell — proved Tuesday evening to harness more than just their digital know-how. Each unexpectedly debuted in two principal roles — Maxwell only given less than 12 hours’ time to learn her turn in Annabelle Lopez Ochoa’s new work, while Woodward had a few days’ notice to pick up the movements for Peter Walker’s choreographic debut.

“I was only supposed to have one of those [principal roles] and one of the girls got injured this morning in the middle of rehearsing,” Maxwell, who also appeared in Peter Martins’ “Bal de Couture,” said of her stage time. “Somehow it miraculously came together.”

Woodward, who is increasingly cast in principal roles and who also appeared in Lovette’s debut, said of her rise: “I joined the company in 2012, I think it’s pretty surreal. I don’t personally believe I’m a big success, but every time I get a new opportunity, it’s really freeing to find myself a little more in each piece.”