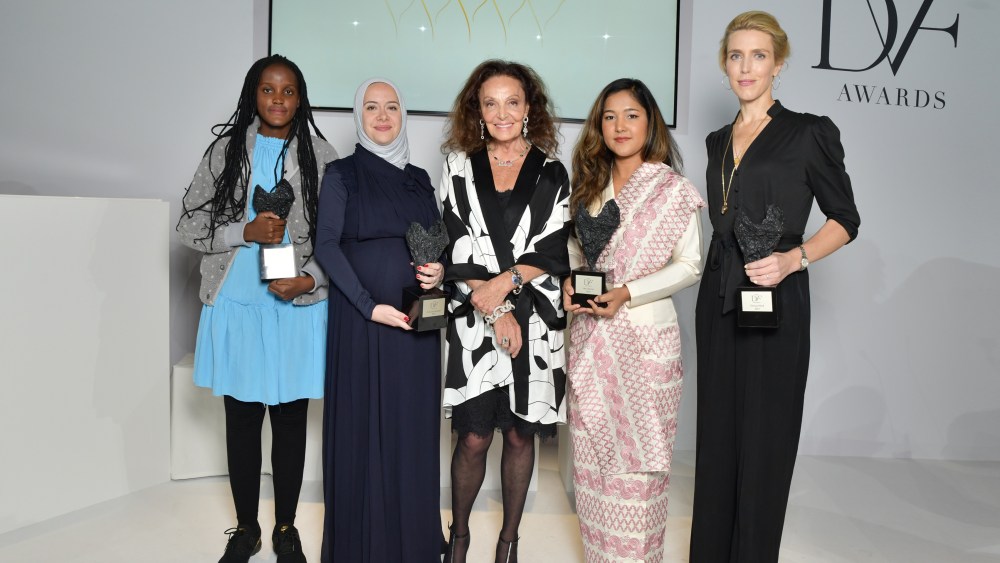 PARIS — A glamorous cocktail reception at the Paris Opera might not be where you’d expect to be discussing topics like war, climate change and the refugee crisis, but those subjects were front and center as Diane von Furstenberg brought her annual DVF Awards to the French capital, which is hosting the Women’s Forum global meeting this week.

Lagarde introduced a special tribute to outgoing German Chancellor Angela Merkel, a video montage that included messages from Hillary Clinton, Oprah Winfrey, Barbra Streisand and Jacinda Ardern — all among the powerful women that von Furstenberg has on speed dial.

“I wanted to pay an homage to her for her 16 years of amazing leadership with compassion, with intelligence and with dignity,” von Furstenberg said before the ceremony.

“She took on a million refugees. She did a favor to the refugees, but she did a favor to Germany, because the people, when you take them on, they work for you. My son only goes to doctors who are immigrants, because he thinks they studied harder,” she added.

The evening included a special performance by jazz musician Esperanza Spalding, and a surprise appearance by Little Amal, an 11-foot-tall puppet depicting a Syrian girl that is traveling across Europe to raise awareness of the plight of refugees and displaced children around the world. It’s a topic close to von Furstenberg’s heart.

The designer was born in Belgium in 1946 to Jewish parents. Her father Leon was originally from the Bessarabia region of Eastern Europe, while her mother Liliane was born in Greece, and was imprisoned by the Nazis at Auschwitz concentration camp while she was a member of the resistance during World War II.

“Both my parents were refugees. I mean, not quite that bad, but refugees nevertheless, stateless nevertheless. I found out very recently that I actually didn’t have a nationality until I was seven. I didn’t know. It’s only my brother who went to get some paper who found out,” she revealed.

French Gates lamented that the coronavirus pandemic lengthened the time frame to close the gender gap to 135 years — and stressed the importance of lifting women to achieve a full economic recovery. She urged women to use their voice in every form and at every level to create change.

The other winners were Rouba Mhaissen, an activist who supports refugees forced from their homes by the ongoing violence in Syria; CNN chief international correspondent Clarissa Ward; Ugandan climate activist Vanessa Nakate, and Wai Wai Nu, a former political prisoner in Myanmar who campaigns on behalf of her ethnic group, the Rohingya.

Mhaissen lamented that the Syrian civil war has fallen from the headlines, even as she paid an emotional tribute to a 19-year-old Syrian who was buried this week after dying in Poland close to the Belarus border, site of the latest refugee crisis gripping Europe.

“I’m very honored to receive the DVF award today, but I’m also a bit saddened that despite almost 11 years having passed since the Syrian revolution started, still we are seeing floods of refugees, we are seeing internally displaced people and people who are really living very much below the poverty line, children with no futures, no education,” she told WWD.

“So for me just being able to say that on stage, to bring back the Syrian cause onstage, when it seems to have been forgotten, with all the other catastrophes going on in the world, that in itself is great,” she added. “Having a sisterhood near you is very important when you do this kind of work.”

Mhaissen, who is pregnant, called for Europeans to resist the temptation to vote for right-wing politicians campaigning on anti-immigration tickets.

“You have democracy today, use it. Don’t elect people who build walls. You think you’re protecting your country by doing that, but actually, everything will come back to you, at the end, so use democracy to further freedom, to further justice to all, because that’s going to be the future of your children,” she pleaded.

Nakate, who turned 25 this week, came with a message of hope, despite the despondency felt by many activists in the aftermath of the recent COP26 climate change conference.

“However, when things like this happen, you think about whether you’re going to give up, or you’re going to continue fighting. And personally, I just choose to keep fighting and to keep organizing and striking, and demanding for climate justice, and to believe that another world is possible,” she continued.

“One thing I know is that women are so powerful, and I also know that women get things done,” said Nakate, noting that educating girls is crucial. “It’s important to have more women empowered, because they are tomorrow’s leaders, tomorrow’s scientists, tomorrow’s doctors.”

“It changes the conversation about war, it changes the way we look at war, the way we talk about it. My Western colleagues in Afghanistan, my male colleagues, can’t go and sit in a room with the women there. So for a long time, you were telling stories at war in some societies without even hearing from women,” she said.

The CNN reporter acknowledged that it was challenging to keep the focus on some emergencies once the news cycle moves on to the next crisis.

“But for me right now, I’d say it’s Afghanistan, still. There’s so much at threat right now and there’s so much that can be lost, so it’s really important that we keep telling those stories, we keep holding the Taliban accountable, and we keep going back to cover this growing humanitarian crisis,” she said.

Ward praised the Women’s Forum for empowering women from across the world.

“In order to try to change the narrative, or have a greater impact, women need to work together, we need to support each other and we need to frame the conversation in the context that we would like to have it, as opposed to in the way that society would like to frame it,” she argued.

“So I find these types of events are actually really gratifying, because it’s a reminder that no matter where we come from, and how different we may be, we’re all on the same page when it comes to certain things,” Ward concluded.

Like many of those in the crowd, von Furstenberg was gobsmacked at the venue for her 12th edition of the awards — the gilded splendor of the Palais Garnier’s grand foyer. She noted that her first event, which included Meryl Streep as a presenter, was held in a coffee shop — albeit at the United Nations.

Paris was where she got her first taste of independence. “The first time I really felt free is when my mother put me on the train in Brussels all by myself. I was nine years old, and I came to Paris, and my aunt had a very elegant shop in Paris,” she recalled.

Later, she was inspired by French magazine editors like Elle founder Hélène Gordon-Lazareff. “So yes, I would say that my first contact with feminism was in France,” von Furstenberg said.

Asked if she had any rituals, the designer said she practices gratitude. “I don’t go to bed in my clean sheets without thinking about my mother, who didn’t have a bed for 14 months. She slept on wood with rats. If you show gratitude, then you immediately pay attention to others, and pay attention to details,” she said.

“We live right now in a moment that there’s a lot of conflict, there’s a lot of aggressivity, and therefore, I think it’s really important to fight that and to look for the little bit of light,” she added.