Fashion and a healthy dose of tongue-in-cheek wit came together on Monday night as New Yorkers headed back from the long holiday weekend. 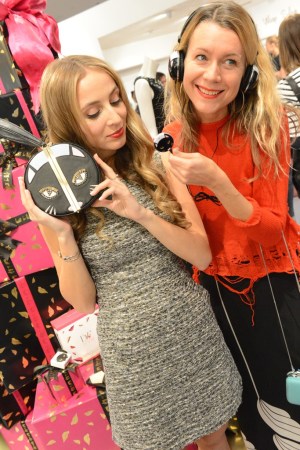 A glowing neon sign illuminating the entrance of Kirna Zabête’s new SoHo store in Manhattan said it all: “Life is short, buy the shoes.”

Fashion and a healthy dose of tongue-in-cheek wit came together on Monday night as New Yorkers headed back from the long holiday weekend to toast the boutique’s new Broome Street location with a cocktail party hosted by Dior. “We tricked out the space,” said cofounder Sarah Easley of the Steven Gambrel-designed venue. “We made it our schizophrenic, multimood. A bit Parisian, a bit SoHo, but Southern, warm and welcoming.”

Easley and partner Beth Buccini flitted around the space playing hostess to guests including Thakoon Panichgul, Natalie Joos, Jessica Seinfeld and Veronica Miele Beard. Both Easley and Buccini sported striped Dior frocks and matching pixie cuts. Naomi Watts, the affair’s hostess, held court by the DJ booth while scanning the assortment of designer goods from afar. “I want to come back tomorrow with more comfortable shoes,” said the actress, gesturing toward her Dior pumps. After spending Thanksgiving in Virginia with partner Liev Schreiber’s family, the holidays were at the forefront of Watts’ thoughts — particularly, her own Christmas wish list. “I’m loving those Céline bags,” she noted. “And I actually love these shoes. I hope they let me keep them — you can put that out there.” Apparently, the actress read the sign by the entrance.

Over in the Meatpacking District, Diane von Furstenberg celebrated the launch of her collaboration with DJ Harley Viera-Newton, a feline-motifed line of clutches and oversize headphones called “DVF Loves HVN.” The crowded flagship was a veritable “It” girl fest, with the likes of Atlanta de Cadenet, Elizabeth Gilpin, Leigh Lezark, Tennessee Thomas, Fiona Byrne, Jessica Joffe and Sami Gayle coming out to support one of their own. Von Furstenberg herself ducked out around 8 p.m. “Pre-fall appointments start tomorrow,” explained a p.r. rep.