The Italian brand and motorcycle maker showed off their new bike for a clutch of gear heads on Thursday. 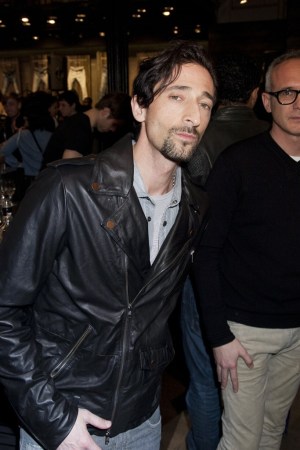 On Thursday night at Diesel’s SoHo store, Adrien Brody had his phone out and was admiring a photograph of himself. In the shot, the actor was on his motorcycle at a gas pump in Los Angeles speaking on his cell phone.

“It’s like the one paparazzi picture that I actually really like,” he said with a wry smile. “Someone sent it to me. They were like: ‘You’re looking cool.’”

He was indeed, a vibe that probably had more to do with the ride he was perched atop, a Monster model from the Italian sports bike company Ducati, than his flouting the folk wisdom against mixing mobile devices and fueling stations. As Brody spoke, Diesel was in the midst of piggybacking a little on that Ducati cool itself. The boutique had been taken over for a party to toast the results of the two brands’ recent cross-Italy collaboration: the matte green and “military chic” Monster Diesel and a complementary line of bike-inspired apparel.

“My father…he almost spent more time on this bike than on the collection,” said Stefano Rosso, the son of Diesel founder Renzo Rosso, who was there representing the family interest. Other partygoers included actor Dax Shepard, professional motorcycle racer Nicky Hayden and André Balazs. Google executive chairman Eric Schmidt made a late and quite incongruous appearance. His blue cardigan stood out amidst the sea of leather.

Brody, who didn’t ride for years after getting in a serious wreck early in his career, was sporting a black biker jacket. He explained its relative value.

“It doesn’t help when you fly over an intersection,” he said. “It does help, but it doesn’t.”

Asked about the continuing appeal of a bike, Brody reminisced on his adolescence.

“Well, there’s the speed element,” he laughed. “I used to drag race. My whole teenage years, before I had a girlfriend, I had my car.”