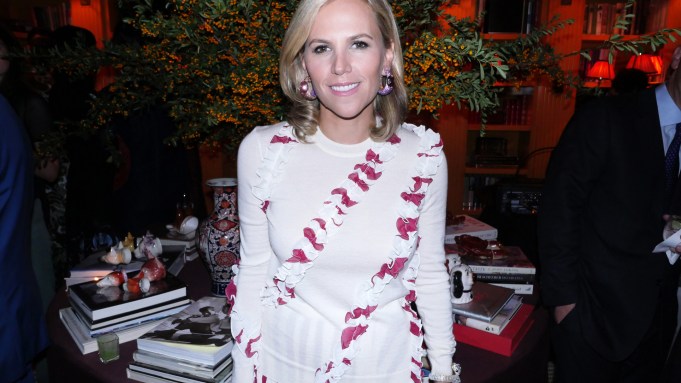 “Like, I knew she’d be great,” Chloe Bailey said Tuesday evening from Tory Burch’s apartment inside The Pierre hotel, “but I didn’t think she’d be that great.”

Chloe, 18, and her sister Halle, 16, were the surprise musical guests during the celebratory dinner Burch hosted, honoring both her spring showing from earlier in the day and her Gemini Link collection. A cherry-picking of Manhattan’s fashion mastheads was there alongside Jessica Alba, Liya Kebede and Kenya Kinski-Jones.

“I never do this,” Burch said early in the evening, of hosting a dinner during fashion week. “But it’s nice to have a lot of my friends here.” Her essentials for an at-home gathering included “a buffet, obviously,” as well as some live entertainment. “I think it’s always fun to have a surprise musical guest, and that’s what we’re having tonight,” she said. “I’m obsessed with music. [At the show today] were Bee Gees, Beyoncé and Young Thug — so a mix, really eclectic.”

Chloe & Halle, Beyoncé-cosignees, treated the crowd to a set hot off their front row appearance at Burch’s show at the Whitney Museum. “She reached out to us and asked us to perform in her beautiful apartment, and — oh my gosh — we just had to say yes, we love her,” Chloe said. The Tory Burch love runs in the family. “Our mom loves her clothes,” Chloe continued, “and our aunt loves her clothes,” Halle added. “It’s a family thing.”

The sisters were capping off a day that marked their first-ever fashion week. “We were sitting right next to Jessica Alba, who we have been fans of since ‘Honey,'” Halle said of the show. “And she was so nice to us — just the coolest,” Halle said. “And we love her Honest brand,” Chloe added. “She’s poppin’.”

With a front row fashion week under their belt, they’re on to the next chapter in the life of a budding sensation duo. “We’ll be going out on tour with Andra Day in November and December,” Chloe said, “And we just got off tour with Beyoncé all summer,” added Halle. “The best summer.”