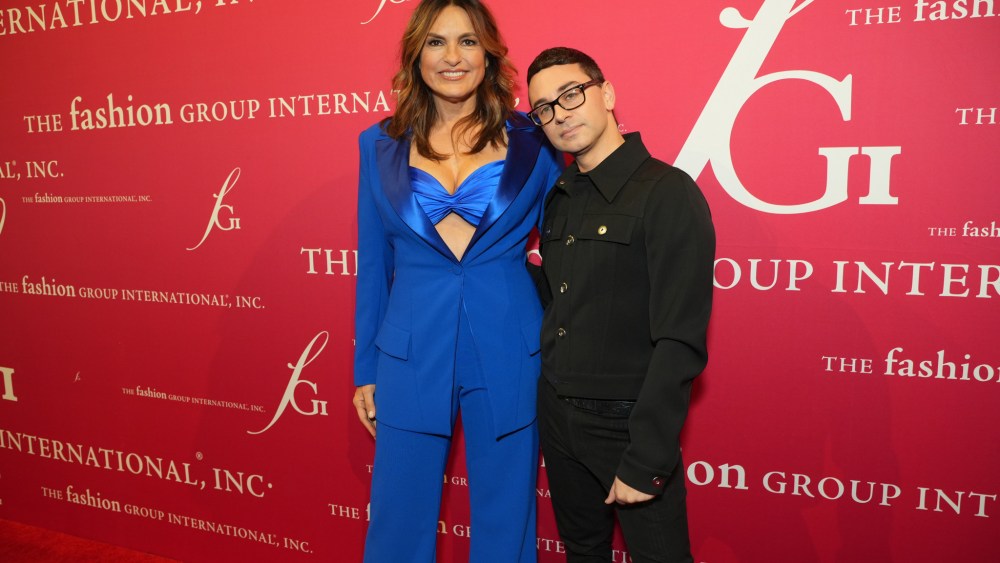 NEW YORK — More often than not, the back story to success is the real story, and the full story gets a little long.

All came into play — surprisingly so at times — during the Fashion Group International’s “Night of Stars” Thursday at Casa Cipriani. Somehow well past the three-year mark of the pandemic and in a rocky business climate, the standard thanks-a-bunch acceptance speech does not suffice. Several honorees (as well as select presenters) at the “Artists & Icons”-themed gala had a lot to say about their careers, celebrity, the industry, humanity, inclusivity and community. And why not? While the past few years have been a slog for some and the road ahead is foggy for many, a few of the triumphs were described in great detail. Cosmopolitan editor turned LoveShackFancy founder Rebecca Hessel Cohen laid out her fairy tale rise brick-by-brick.

Uoma Beauty’s Sharon Chuter was among the crowd’s favorites. Accepting her award from Sir John, she spoke poetically about inclusivity and acceptance. “I want to inspire everybody that true beauty is the beauty that is in all of us. Sometimes you may not understand that beauty that is underneath or that beauty that Vogue magazine is selling to you. But you should know that nonetheless. It’s up to you and me to make the world a better place. Can we do that? You dig?” Chuter said.

Honoring Firmenich’s global perfumery president Ilaria Resta with the Sustainability award, Deepak Chopra defined beauty in another way — “when you bring your presence to any object.” Resta was of a similar mind-set, recalling how four elephants in the middle of the road in South Africa once stopped her family’s Jeep for three hours. And their initial impatience dissolved into the surrounding natural beauty. “I thought to myself, ‘What a privilege it was to have left at that particular moment.’ And how we humans take over nature and how much we take for granted. We’re constantly moving, running and building without ever taking a moment to be still.”

“It’s good to be out and to see everyone — and to not be home in my pajamas,” a suited-up Jason Wu said en route to his table.

Huma Abedin was all-in with the dress code, too, having buzzed by her 10-year-old’s back-to-school night earlier in a sequined gown.

After receiving the Humanitarian award from Abedin, Prabal Gurung spoke of how his Shikshya Foundation has helped 300-plus children in Nepal gain an education. He also clued in attendees to how his mother had advised him about his acceptance speech. “Calmly,” she said, ‘Prabal, this award, this recognition is not about you. This award is about the children, the foundation and all the work that the volunteers have been doing, so don’t make it about you or your ego,’” Gurung said before thanking supporters and emphasizing the importance of individual responsibility.

As the music was cued, as an apparent sign to speed up his remarks, Gurung stood firm, waiting to wrap things up by dedicating the award to the children benefiting from his foundation.

Later in the program, the Trailblazer award winner Warwick promised brevity — “It’s getting late. I’m missing my football game” — to much applause. Addressing Gurung directly, she said, “Honey, let me say something: They turn the microphone on me, they’re going to hear about it. That was one of the rudest things I’ve ever witnessed. You don’t do things like that. This young man was being honored. I swore I wasn’t going to be the Twitter queen, but sometimes….When I became a Twitter-ee, I told all of those, who were tweeting that I would not tweet, that I would ‘twquote.’ So sound [team], you know better.”

Thanking FGI for the honor, Warwick said, “And as a Trailblazer? I think of me as just being flat-out nosey. That is part of what a trailblazer is, about wanting to know and wanting to change.”

Accepting his award from Mariska Hargitay, one of eight women he outfitted for the Emmys, Christian Siriano also had an eye on the clock. Explaining that when Janet Jackson phoned him in the car on his way to the event, Siriano had suggested speaking about the specifics of a custom design Friday instead, it was no avail.

“’Can the shoulder be a little different and I would like a tighter pant.’ I was like, ‘OK, I’m going to get out of the car. I love you,’” Siriano said. “As Prabal [Gurung] and other designers know, that’s what it takes in this business. You can be going to get an award, but you still have to hustle and work hard to thrive today.”

Although days when Jackson calls as FGI gives you an award are great, other days are about “logistics, bills, shipping, and shipping is stuck. ‘Where are the gowns? Beyoncé didn’t return it. Oh well,'” Siriano said before pedaling back. “Is anyone recording? It’s dry-cleaned. It’s great. It takes a while, but you get it back.”

Amidst much laughter, Siriano continued, “And then customs — ugh. Customs, if something has one feather, fish and wildlife hate you. I don’t use feathers anymore. I got it. Some days are great. Other days are a challenge. That’s what we’re living in.”

Andy Hilfiger was also on hand to present this year’s Fashion Oracle award that was designated posthumously for Elvis Presley to Authentic Brands Group’s senior director of brand management Matt Abruzzo, who called 2022 “the year of Elvis.” The king of rock ‘n’ roll’s music and pop culture are unrivaled, Abruzzo said.

Unforeseen circumstances caused Michael Kors to bow out of the gala last minute, but his longtime friend Iman highlighted his acumen and Gods Love We Deliver philanthropy. In a pre-taped video message, Kors recalled how as a five-year-old his mother abided by his suggested wedding dress redesign, before hopscotching through a few career highlights and missteps. The designer mentioned ignoring some practical advice when he took on the creative director role at Celine in 1997 — namely drinking Coca-Cola all the time and wearing sneakers.

Kors also spoke of launching menswear in the early ’90s with a fashion show in Grand Central Terminal that included models wearing bodysuits without any pants. Rather than look back at that as “ridiculous,” Kors said, “I don’t. That is ultimately what fashion is all about, trying different things, learning and always moving forward.”

Just as Kors was decades ahead of the sneaker trend, American designers continue to influence their European counterparts. In conversation during dinner, Wassner made a case for how American culture and the work of some independent designers have been pilfered and capitalized on by luxury powerhouses. That inevitably led to debate about copyrights, originality, personality-driven fame, domestic manufacturing, government support, European artisanship and financial infrastructures. All of that, of course, is another story.