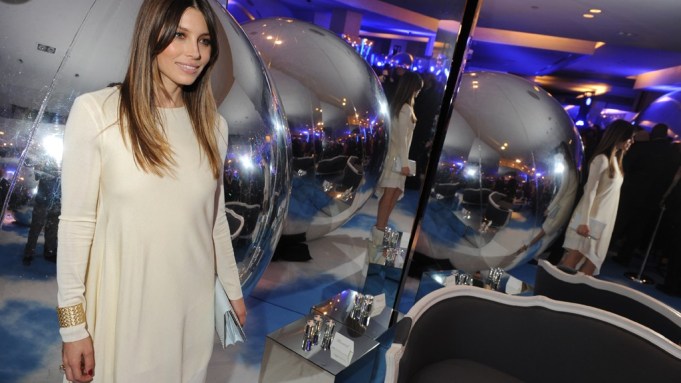 The house of Dior dashed a French accent mark atop the New York Fashion Week proceedings on Friday night with a party heralding the commercial availability of Raf Simons’ fall ready-to-wear collection at Saks Fifth Avenue, and its accompanying window takeover.

Party planners remade the midtown retailer’s third floor in the style of the set design for Raf Simons’ fall runway show. The space was a morass of mirrored walls and blue floors that was occasionally confusing to navigate for the fashion week social potpourri on hand to celebrate.  Attendees included a host of Saks and Dior executives (Sidney Toledano, Steve Sadove), models (Daria Strokous, Anne V., Hilary Rhoda) socials (Alexandra Richards, Hannah Bronfman, Miroslava Duma), at least one Mets starting pitcher (Matt Harvey, accompanying Ms. V.) and, from the looks of it, a few loyal Saks customers. (If the proceedings prompted a Fashion’s Night Out-related flashback episode in one or two of the many editors on hand, it would be understandable.)

Upon arrival, Jessica Biel, the night’s third, and only non-institutional host, was whisked up to an eerily quiet sixth floor,  where she met with a reporter or two. She stood out against the men’s fare in a cream knit Dior dress.

“We were just saying, ‘Can we shop right now?’ We’re cruising through Saks at night and it’s as if we’re in the movie ‘Mannequin,’” she said, referring, of course, to the 1987 romantic comedy starring Andrew McCarthy and Kim Cattrall as, respectively, a stock boy and the magically animated mannequin he falls for. Alas, the big selling point of the Dior windows was that they had no mannequins. The reboot was on hold.

“I know,” Biel laughed. “If we’re trying to remake that movie, it’s not going to work with invisible mannequins, but… I think it’s pretty cool. I think it’s very whimsical. They look like they’re floating through…almost spirits or something.”

The actress has been in New York for much of the year and in the midst of a quintessential celebrity September in the city. She had already accompanied husband Justin Timberlake on his MTV Video Music Awards victory lap and taken in a match at the U.S. Open, and now here she was at fashion week.