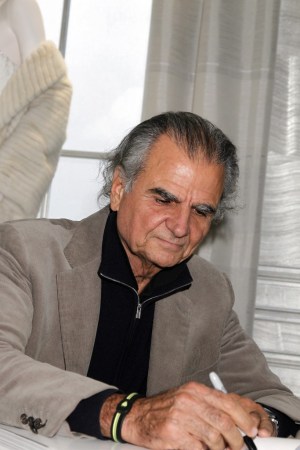 On Thursday evening, Patrick Demarchelier sat alone at the top of the Dior boutique on Madison Avenue behind a heavily studded silver table, directly in front of a mirrored wall, his pen uncapped and at the ready. Demarchelier was there to sign copies of his latest tome with Rizzoli, “Dior Couture.” It was his last stop on the book tour, which had also passed through London and Paris. The photographer accepted praise, unmoved by the many outstretched hands of old friends and fans of the fashion house and his previous works. “Do you think it’s good?” Demarchelier asked, with genuine concern. “Then I’m happy.” Surely a lot of people have told him that it’s beautiful? “It’s still nice to hear,” he said with a grin and a dose of Gallic charm, “that you’re doing credit to a master.”

Further north, at Barneys New York, Todd Oldham was celebrating the publication of his massive monograph on Alexander Girard, weighing in at a hefty 15 pounds. “I was terrified it was going to be 20 pounds,” Oldham said, greeting John Waters. “So I was thrilled with 15. You can do reps with it.” Oldham picked through the entire Girard archive to uncover never-before-seen materials from the designer’s expansive oeuvre. “The textiles are what people know the best, that’ve already sort of leaked,” Oldham explained, “but Girard’s career really began as a very young child when he asked to redesign his own bedroom, and he did it, and you see it and my God, it’s not like any other child’s bedroom you’ve ever seen.”

Simon Doonan heaved a copy into his arms. “Not only is it gorgeous, it’s a great workout. Todd, I got a hernia.”

“Alexander Girard is a consummate talent,” Doonan explained. “I only really think of three people as being like that: Yves Saint Laurent, Alexander Girard and Rei Kawakubo. Alexander Girard was just an extraordinary, extraordinary talent. He’s a multifaceted, scarily talented dude. When I looked at his book, I just wanted to find the nearest body of water and fill my pockets with rocks and just walk on in. I think of myself as a creative person and then I see this and I just want to die.” Doonan paused, pursing his lips before adding, “Merry Christmas!”