Krysten Ritter, Kate Mara, Emmy Rossum and Ashley Madekwe were among those who turned out for the annual affair. 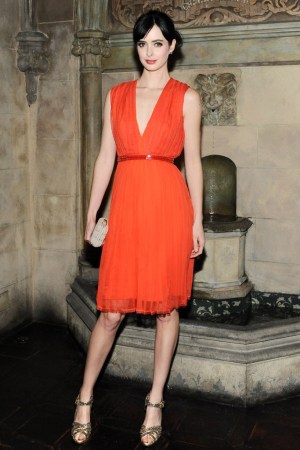 Few of the guests at Dior Beauty’s annual pre-Golden Globe dinner Wednesday at Chateau Marmont in West Hollywood needed makeup to look pretty, but a little gilding of the lily never hurt. The house’s makeup artists gave each actress, from Christina Hendricks to Michelle Monaghan, the once-over, and a train case full of products sat on everyone’s seat.

Most, like Shiva Rose and Liz Goldwyn, couldn’t resist opening the goodies before dinner and Instagram-ing away. Others, like Ashley Madekwe, who just returned to work on “Revenge,” were fighting just to stay with, never mind document, the moment. “We have to be on set so early, I just might fall asleep at one of these things,” she quipped.

When pondering her party plan for the week, Kate Mara also had rest on the brain. “I’ll probably go to a few events, but part of me wants to stay home in bed and watch the second season of ‘Homeland.’”

While one half of the long table beat an early exit (by Chateau standards, before 10 p.m. qualifies as early), the other half stayed to celebrate Nina Dobrev’s birthday with a surprise red velvet cake, which led one passing hotel patron to comment, “There’s a really long table and a cake. Must be a wedding or something.”