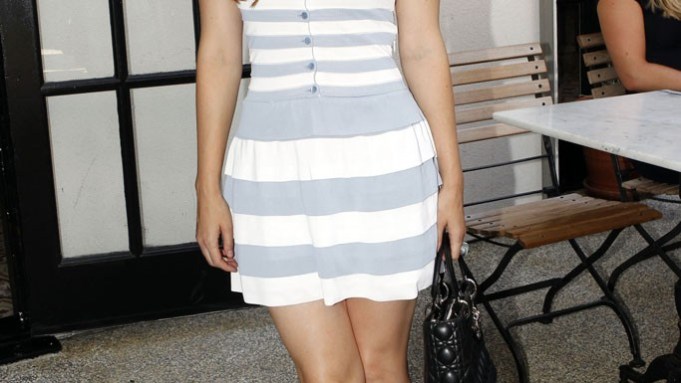 HAVE MAKEUP, WILL TRAVEL: When it comes to being prepared, Boy Scouts have nothing on Hollywood starlets.

“My makeup artist had to bring her big purse because she has every single [Dior] product that I’m wearing at the moment, and you never know when you’ll need a touch-up,” said actress Erin Cummings, who was among the flock at Tuesday’s Dior Beauty luncheon for Operation Smile in Los Angeles. The beauty brand has hosted Operation Smile events since 2009. The nonprofit, which performs cleft lip and palate repair surgeries for children in need, has recently focused on expanding in developing areas in countries such as Brazil and India as well as the continent of Africa.

Among the other charitable-minded actresses attending on Tuesday was Emily Montague, who dished on her turn with Colin Farrell in the just-released remake of classic vampire flick “Fright Night.”

“Oh, there was a little bit of nibbling — and I can’t complain,” she said.

“I feel like an Amazon; everyone looks just amazing,” said Jaimie Alexander, also accompanied by her makeup artist, Jeffrey Paul.

Judy Greer, who stars in the upcoming George Clooney film ”The Descendants,” cited an unexpected source for her fashion inspiration.

“Aging Asian men on the subway in New York,” Greer said. “They always have the best cardigans and those strangely-but-perfectly tailored trousers.”