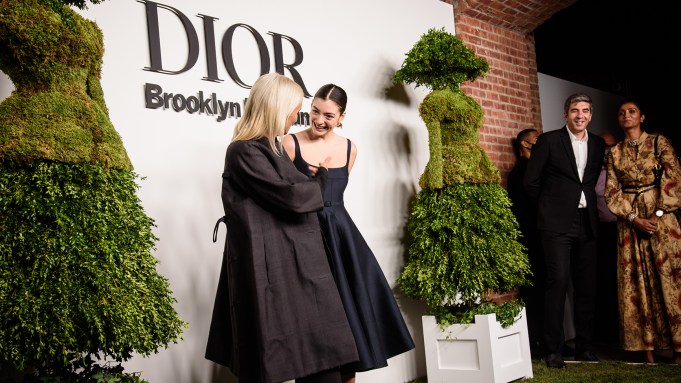 On the first night of New York Fashion Week’s big return to the party scene, Dior stole the show with a long list of notable names at their event.

Maria Grazia Chiuri has plenty on her plate with fashion month stretching ahead, but she was insistent upon making a short journey to New York to celebrate the opening. Chiuri, it turns out, is a big fan of the Brooklyn Museum, and was the deciding factor in having the exhibition shown at the Brooklyn Museum, of all U.S.-based museums.

“I really like the exhibitions that they do in this museum. They did a really special exhibition about women artists, about feminism. It’s magnificent,” she said from the halls of the installation, between greetings from well-wishers.

It was her first trip to New York since the pandemic began, and she said it was a mix of “work and pleasure.” “I’m very excited — also because there are some friends that I finally see again,” she said.

“New York is a very important city and it’s super exciting — it’s impossible that it doesn’t influence [my work]. The women in New York have a specific style of life, so that’s influenced Mr. Dior and influenced me, too,” she said.

Lorde milled about the exhibition thoughtfully with a rep close by, taking in the works. Braun, a bit of a fixture on the New York social scene this summer, arrived promptly close to 7 p.m. and quickly found his way upstairs to get the party started. Compared to some of the rowdier parties happening that night, the crowd felt respectful of Covid protocol: guests could pose maskless at the step and repeat but were required to re-mask when continuing on (a nightmare for photographers trying to spot VIP faces, but safety first).

Davis and Parker were the only two from the “And Just Like That” cast able to escape for the night.

“I was just working at Steiner [Studios] which is really close — Nicole came and picked me up to be my date tonight, Sarah [Jessica Parker] and Cynthia [Nixon] are still working,” Davis said from the lobby. “They would love to be here, too — we all love Dior, of course.”

She and Parker seemed to be having the time of their lives, twirling about for photographers and grinning from ear to ear. Davis, who said it’s a “miracle” to be back working with the “SATC” crew, was happy to have an event to get dressed up for, although she’s thoroughly enjoying stepping back into Charlotte’s wardrobe after all the pandemic time.

“No style happened during COVID-19 for me — mommy style happened. That’s one of the nice things about going back to work is that you get to remember everything and I do feel like your closet is new and fresh because you didn’t put anything on,” Davis continued. “I certainly gained a few COVID-19 pounds, had to lose those before going back to work. Work was a good incentive to shed some of those and fit back into my things. It’s nice, it’s like rediscovering your own things.”