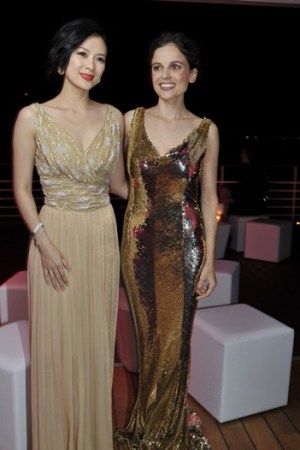 Dressed in a gold sequined Dior gown, Anaya surveyed the giant photos of her dotted throughout the venue, set on a cliff overlooking the Mediterranean.

“I feel like I’m at my own wedding, but the groom is missing,” she laughed. “It would be scary if I didn’t like the pictures, but I like them, so it’s OK.”

The actress has been catapulted into the spotlight as the lead in Almodovar’s “The Skin I Live In,” presented in competition at the Cannes film festival.

“Nine hours’ sleep is the secret,” pronounced Marisa Berenson. “I’m a very healthy eater, you know, so I just eat a lot of fruit and things that are healthy, and drink lots of water.”

For Dior president Sidney Toledano, the solution was just a few feet away – a swim in the ocean.
“I just flew in from Hawaii, where I was feeling pretty jet-lagged and went for a swim in the Pacific,” he said. “Swimming is good for short nights of any kind.”

French actress Zoe Felix lamented that she could no longer indulge like before.

“When I was 20, I would wake up, take a shower and be fresh as a rose. These days, it is a little harder, so I avoid overdoing it when I really feel like it and I drink a glass of water in between each glass of Champagne,” she said.

Dior Homme designer Kris Van Assche has come up with the most radical solution.

“I never party,” he said. “But I should, so if you have some good advice, I might take it!”