By Rebecca Kleinman and Amy Wicks on November 30, 2011
View Slideshow 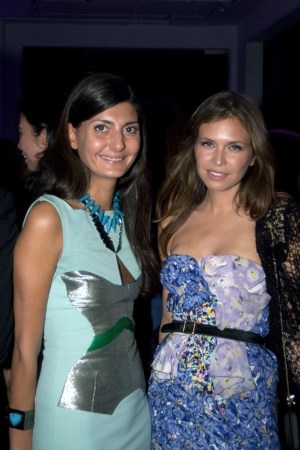 Dior exchanged navy for neon at its Design District dinner on the eve of Art Basel in Miami on Tuesday night. The house’s whole team got into the Eighties spirit inspired by Anselm Reyle’s collaboration — a fashion first for both the brand and the Berlin artist — with Dior couture of zebra prints, bubble skirts and vinyl confetti. Showing off her electric-blue manicure from the adjacent Dior pop-up shop’s nail bar, Delphine Arnault wore a gold sequin minidress from the 2012 cruise collection and Reyle’s quilted clutch in matte black.

This story first appeared in the December 2, 2011 issue of WWD. Subscribe Today.

The bash’s 175 guests included Michael, Eva and China Chow, Sam Keller, Gabrielle Union, Laure Heriard Dubreuil, Kim Heirston, Craig Robins, Katherine Ross, Santiago Gonzalez, Simon de Pury and Olympia Scarry, with hosts Stefano Tonchi, Almine Rech and Larry Gagosian. Pharrell Williams chummed around with Camille Miceli, Dior’s artistic director of costume jewelry, for most of the night. “I’m just so excited to see my friend and all the good things to come from her for Dior,” said Williams, who was appropriately attired for an Eighties music video in a red leather jacket with zippers and general’s hat decorated with Mickey Mouse pins.

On Wednesday night, five checkpoints greeted guests at the Art.sy party thrown by Louis Vuitton at Soho Beach House. Williams, Naomi Campbell, Adrian Brody, Brett Ratner and Owen Wilson were rewarded for their efforts to get past security with prerecession excess at a lavish beachside barbecue in a tent constructed right on the beach (giant skillets of meatballs and paella apparently are barbecue). Paris and Nicky Hilton walked the party, trying their best to get noticed by the art crowd, who mostly ignored them. If they want attention at Art Basel, maybe they should buy some art.