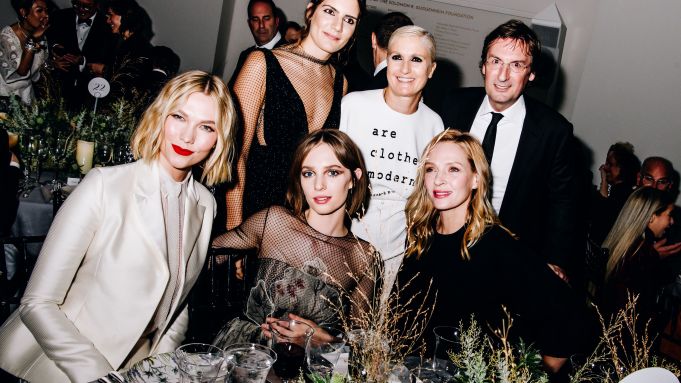 Frank Gehry, one of the honorees at this year’s Dior Guggenheim International Gala, decided to heed a classic piece of advice: never meet your heroes.

“As a young architect I studied Frank Lloyd Wright. I did everything: I studied every drawing, every piece of work, every building, all the houses, I visited everything,” said the architect, addressing the crowd seated inside the museum’s rotunda — designed by Frank Lloyd Wright — on Thursday night. “And then I got a chance to meet him, and I turned it down. I just didn’t want to meet him.”

Gehry was being honored as one of the museum’s great “Franks”; he designed the Guggenheim Museum Bilbao, as well as the planned Guggenheim Abu Dhabi. Also honored during the museum’s annual fundraising event were Peter Lawson-Johnston and “Works and Process” curators Mary Sharp Cronson and Caroline Cronson.

“It’s a great honor to be in this space, I’ve been here many times. The Guggenheim has been a big part of my life,” Gehry added.

During cocktail hour, guests including Karlie Kloss; Uma Thurman and daughter Maya Hawke; Charlize Theron; Zoey Deutch; Nina Dobrev; Sophia Lillis and Wyatt Oleff, and Mickalene Thomas (who Dior is hosting a dinner for during Art Basel Miami Beach) made their way up the spiral ramp to take in the exhibitions on view, including “Artistic License” and sculptures by Brancusi.

“Frank [Gehry] is iconic not only in America, but for the world,” said Dior chief executive officer Pietro Beccari, who was with Gehry in Korea a few weeks ago for the opening of Louis Vuitton’s Seoul boutique. Beccari will be back Stateside in a few weeks for Dior’s resort show and Art Basel Miami Beach initiatives.

“I think art and creativity go hand in hand, they’re both a vision of today’s world made through the eyes of an artist or creative person,” he added. “They have the capacity not only to give a point of view, but influence the opinion of others. And I think art and creativity and fashion there will always be this intimate relationship, which we did not invent, but we nurture and we continue to foster.”

Héloïse Adelaïde Letissier, who goes by the stage name Christine and the Queens, had performed the evening before for the gala’s pre-party.

“Quite an impressive setup,” she said, seated at a table with Dior creative director Maria Grazia Chiuri and the house’s other big VIPs; it proved to be a more stationary night. “I never really experimented with it before, but the stage was entirely round, so you’re surrounded with people,” she added. “So it was kind of challenging as a performer, in a good way. Also I was surprised because I was expecting a stiffer atmosphere, like sometimes in fashion it can be stiff, people are kind of restrained, but they really got loose at one point and we all kind of vibed together.”

She also discovered a nice synergy with her Dior performance outfit. “I like when fashion allows me to still be myself as an artist and as a performer, so I didn’t feel like I was in a disguise,” she said. “I asked for clothes I could dance in, and I discovered that Dior made a beautiful collection dedicated to dance.”

Letissier finished her most recent tour last summer, and is currently focused on creating new music.

“Which might be out soon — she says mysteriously,” Letissier said.

Celloist Kelsey Lu played for the crowd after dinner as tribute to the museum’s “Works and Process” performance art series. Part of the series’ fall season, Isaac Mizrahi is gearing up for performances of “Peter and the Wolf,” which he directs, narrates and designed the costumes for. “It’s become this kind of holiday tradition, which I absolutely love,” he said.

His love extends to the Guggenheim at large. “I think it’s one of the five great museums of the world, in all of its different locations and incarnations and everything,” he added. “When I have the opportunity to support the arts, I really step out — and especially for the Guggenheim, because I just love it.”