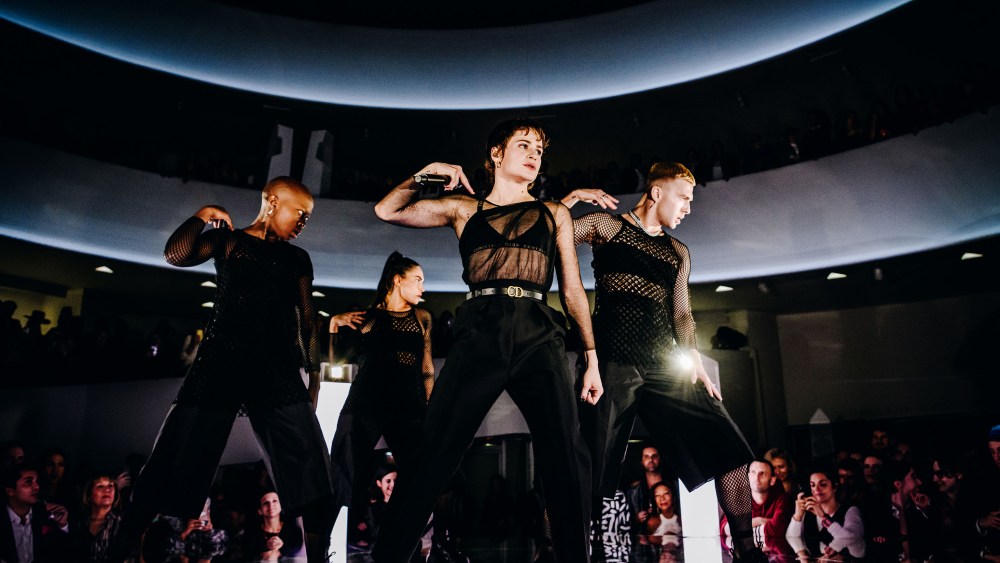 “Last year I was shooting [Fast & Furious film]’Hobbs and Shaw’ when they had the fashion show and I couldn’t go — every year that I’ve been wanting to go to the fashion show I’ve been working,” González said, from up high in the rotunda as Christine and the Queens’ set was getting under way. “Luckily this time around I was able to come and freeze my butt for Dior.”

The actress has been busy as of late: she spent four months in Spain last year filming “Paradise Hills” with Awkwafina and Emma Roberts (“I was obsessed with Spain”); in January she’ll be seen in “Bloodshot” and then “Godzilla vs. Kong,” followed by “I Care A Lot” with Rosamund Pike and Peter Dinklage.

“I’m finally able to be present and see the whole collection,” she said, outfitted in a long-sleeve Dior dress she praised for being both “femme and masculine.” “It’s just so gorgeous.”

Izzo was in attendance with her girlfriend, “Unemployed” magazine co-creator Sophie Tabet. The magazine’s launch party had taken place in SoHo the night prior, and on Monday Izzo attended the Glamour Women of the Year awards, which she called “the most emotional night of my life.”

“And then I come here and I run into Eiza González, a good friend of mine, and it’s like this has been the most fun week ever,” Izzo said. “And I get to wear Dior tonight.”

The Los Angeles-based actress was headed back to California the next morning to return to set for a 2 p.m. to 5 a.m. shoot for her upcoming Showtime series “Penny Dreadful,” which premieres in May. In addition to the acting, she’s involved with Unemployed: “I am a collaborator with them…OK, mainly moral support,” she admitted, laughing. “I do a lot behind the scenes. When I say collaborator, I’m behind them every day, helping with the shoots, whatever I can do.”

She took a moment to contrast the different art between her two nights: from independent magazine to the Guggenheim.

“That’s the whole point of life: you get to do all these different things. I get to be an actor, I’m also an activist, I’m also a feminist, and we live in a world today where it can all come together. And I can use my platform to make whatever thing you have to give to the world better.”