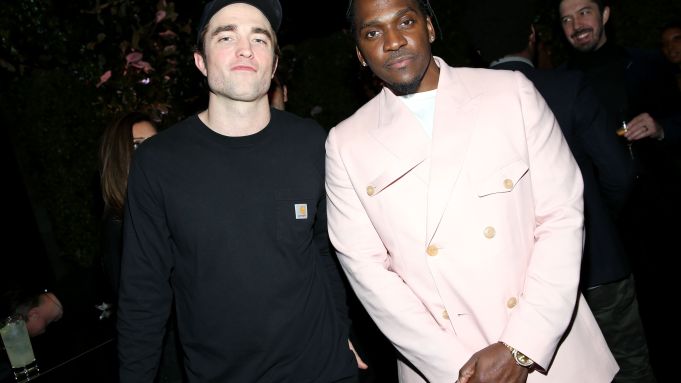 Pusha T still has to, you know, win the Grammy for Best Rap Album Sunday night, but if Dior is throwing you a party, why not start early?

Walking past the latest offerings and mirrored walls, the guests arrived at a slim hallway which gave way to a private, dimly lit space, where the walls seemed to be climbing with lush foliage just for the occasion of hailing the artist for his work “Daytona.”

“I’m all about rap right now,’ said Pusha T who’s up for the Grammy along with Cardi B, Nipsey Hussle, Travis Scott and the late Mac Miller.

“It’s awesome,” he continued. “Ultimately, I’ve been watching the Grammys forever and I’ve never seen a rap album as pure as mine ever be nominated. So I’m super excited about that.”

And if he takes home the award, plans are already in motion to continue the revelry.

Throughout the night, in his signature power stance, the rapper would survey the crowd of supporters before breaking his observation by returning to a small huddle of friends or shaking a familiar hand.

One of those moments happened to occur with Dior Men’s artistic director Kim Jones, who later noted of the relationship, “It’s organic and I like things like that. I think he deserves to win.” Jones’ turn at Dior has by all accounts become the most coveted brand on the carpet, along with Virgil Abloh’s Louis Vuitton, for young, cool men in entertainment.

“I mean, Dior is family,” Pusha T said of his connection to Jones and the fashion house. “They dressed me for my wedding; they dress me all the time. Kim is phenomenal and I’m happy to be here.”

As the party went on, the night was livened by an announcement from DJ Clark Kent. Interrupting a mix featuring a medley of Pharrell’s  hits and a modern selection of rap songs, Kent asked, “Why is everybody acting like I don’t know how to DJ? Pusha’s my man, that’s why he asked me to be here. Stop wasting your time. Grab a girl and get dancing.”

Grab a girl they did not, but the message did stir the crowd to movement. Among the inspired was Tyler, the Creator.

“He’s like my favorite rapper,” he said, taking a break from dancing. “He taught me how to be cool when I rap. I learned how to put words together from ‘Marshall’ [by Eminem]. When I came across Clipse [Pusha T’s former rap duo], I was 11. I learned how to find my real pocket and be cool with it and I really appreciate him for that. I got to watch him and Pharrell make music the other day that melted my face off. I felt 10 years old again. It was beautiful.”

Also on the scene was actor Nick Robinson who offered that he was there “because I’ve been a fan of Kim’s work for a long time, we’ve known each other for a little bit. This collaboration is a very cool cross section of different and creative cultures that are coming together and I think it’s very interesting.”

The party also slowly transformed into a listening party, motivating Pusha T and the crowd to rap the lyrics from his latest such as ‘Hard Piano’: “I’m dyin’ to find a way to get a Grammy from it.”