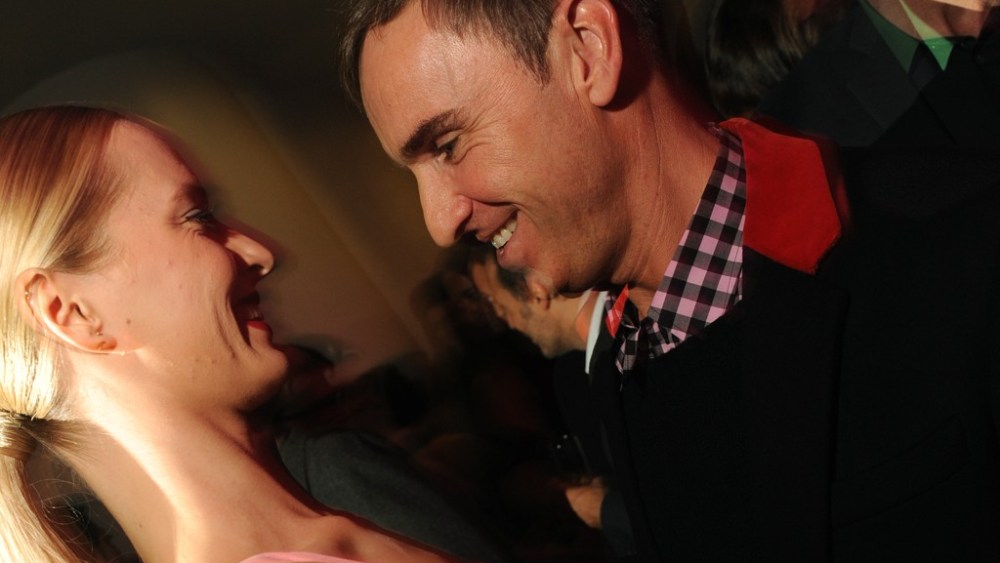 “My first time in New York, 35 years ago, I came here,” Sidney Toledano said at Wednesday night’s Guggenheim International Gala pre-party, the first in a Dior-hosted two-parter to celebrate James Turrell and Christopher Wool. Toledano’s eyes scanned the museum’s coiling incline, now lit up in shades of fuchsia, violet and crimson. “There’s a kind of energy here. I just love this place.”

“Oh, I love everything about the Guggenheim. The architecture, to start with, is amazing,” Raf Simons, in a neighboring circle, added. “I think the way the exhibitions are curated is mind-blowing. It’s wonderful.”

Guests clotted up by the bar, snatching up Champagne and pear elderflower concoctions. Notables zipped up to the VIP section on the second and third level. Shala Monroque, Fabiola Beracasa and Gaia Repossi clicked up the ramp, cluttering around a Kandinsky. Nearby, Elizabeth Olsen, hand-in-hand with boyfriend Boyd Holbrook, was asked by security to show her wrist-bracelet to gain entry to the cordoned-off section. Also hand-in-hand, Miles McMillan and Zachary Quinto emerged a few minutes later, the pair barreling towards the bar.

A late-arriving Harry Brant coaxed Pat McGrath to come to Sunday’s Julian Schnabel exhibition opening at The Brant Foundation in Greenwich, Conn. “You have to come, you’ll have the best time,” Brant said, the pair clomping up towards the third floor. “You’ll just love it.” Further down the incline, Olivier Theyskens and Simons were in a lengthy tete-a-tete.

“Oh you know, personal things,” Theyskens demurred when asked what the two chatted about. “I’ve known Raf for over 16 years, so we have a lot to talk about.”

Simons was eager for the impending DJ Richie Hawtin (aka Plastikman) performance to begin. “I was very excited to bring Richie in,” he said moments before the room began to thump. “He’s a performer that I’ve admired since he started, from the days when we were all young club kids.”