‘Dior & I’ Premieres in New York 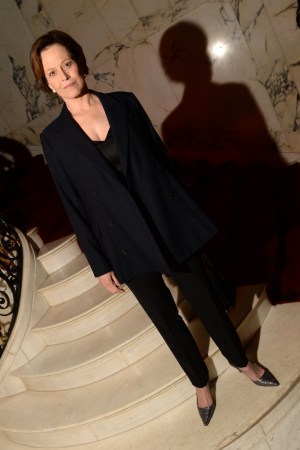 The filmmaker Frédéric Tcheng was in New York Tuesday night at the historic Metropolitan Club on the Upper East Side.

He had just shown his new documentary “Dior & I,” about the making of Raf Simons’ first haute couture collection for the venerable French house, and was anxious about the reaction from the 90 or so regular Christian Dior clients in attendance, like actress Sigourney Weaver.

The subjects of the film, Simons and the members of the famed atelier, were not in attendance — there’s a cruise collection to finish, after all — and maybe that’s for the best. For all intents and purposes, it’s the Dior clients who are the intended audience of this legacy-burnishing documentary.

Filmed almost a year after the annus horribilis that saw the dismissal of John Galliano, “Dior & I” seeks to play directly to their emotions, to serve as a reminder of their bond with the label itself rather than the designer at the helm.

When he approached Dior about the project, Tcheng pitched a film about the making of extraordinary garments.

“I knew the atelier would play a huge part in this story,” he said. “I described it as an ensemble story. It wasn’t just a designer, it was about a team of people. I remember someone saying that the designer was like a conductor and without the orchestra he couldn’t play.” How could Dior say no? It was a perfect message to communicate to a jittery couture clientele after years devoted to the cult of personality around one very colorful creative director. Like another recent fashion documentary, “Scatter My Ashes at Bergdorf’s,” Tcheng’s film ends up being a masterful exercise in brand-building.

It is telling that at one point, a master tailor tells the camera: “The designer may change at Dior, but one thing that never changes: the atelier.”

The movie opens with a brief voice-over reading of the couturier’s autobiography, “Dior by Dior,” over a montage of archival footage from the house’s early days then cuts to a simple title card that glosses over a lot of inconvenient history: “55 Years Later.”

Over eight weeks in the summer of 2012, Tcheng followed Simons; his right-hand man, Pieter Mulier; various executives, like the irascible Catherine Rivière, who keeps tabs on important couture clients, and the master premières as they toil away translating the designer’s vision into reality.

Of course, we all know how the story ends. Twenty years after Isaac Mizrahi documented the making of his fall 1994 ready-to-wear collection in “Unzipped,” plus many years of reality TV, audiences are primed for the format that follows: episodes of drama and tension (the fabric specialists can’t get a print right; Rivière sends a seamstress to care for a couture client at the expense of the collection) that culminate with a personal triumph.

Along the way, there are moments of candor and genuine emotion. In one scene, Simons confesses: “I find myself in a situation where the audience sees me as a minimalist. I’m not.”

The audience at the Paris Theater lapped it all up. They predictably responded to the humble, relatable master seamstresses and tailors of the atelier.

“I’ve always admired their work because they’re the ones working the hardest,” said the model Aymeline Valade, who plays Betty Catroux in another film about fashion, the upcoming “Saint Laurent.”

Weaver dutifully waited around to personally thank, in flawless French, the filmmaker for his work.

“I was so moved,” she said. “To meet all those wonderful people making the collection was really a thrill, to see how much it meant to everyone. It will show people a different side of fashion.”

In other words, message delivered. Before walking out, everyone got a bag with a quaint book tucked inside, “Dior by Dior.”