The brand toasted the launch of its Dior VIII timepiece with a very large projection of its spokesmodel in New York on Wednesday. 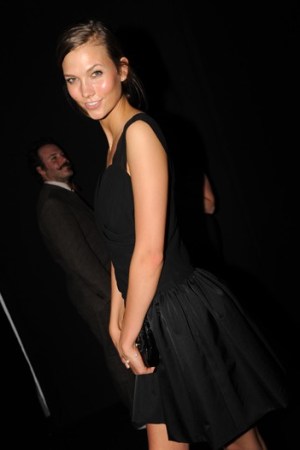 A video system in the space’s anteroom broadcast an endless loop of the actress runway-stomping her way through an empty apartment, watch firmly on wrist. As guests, who included Kellan Lutz, Karlie Kloss, Bryan Greenberg, Krysten Ritter and Nora Zehetner stepped off the red carpet, they were enveloped by the projections. After arriving to the party, held in the space formerly home to Deitch Projects in SoHo, Theron sat in an upstairs room for interviews.

“No, God no, that could never be normal,” the actress said with a smile when asked if one ever grows accustomed to the larger-than-life treatment, which had also included a full page ad in that day’s New York Times. “How is that normal? It’s always very incredibly bizarre. It’s like an out of body experience in many ways. I’m always so happy with the campaigns that I do with them… I’m very proud of it, but it’s very awkward to kind of look at yourself like that. Very bizarre.”

Her interviews complete, Theron headed back downstairs to address the crowd, which had grown to include models, downtown types and Dior executives. The actress screened a short film about her African Outreach Project and then introduced the violinist Owen Pallet who played a short set. Later in the evening, Ryan McGinley was standing back in the lobby with the projections.

“It didn’t click at first,” McGinley laughed of the space. “I was like ‘Oh sh-t: It’s Deitch. I’ve been here a thousand times.’”

He looked at the walls around him and mused on lost opportunities.

“I wish an artist had used projections this big,” he said.