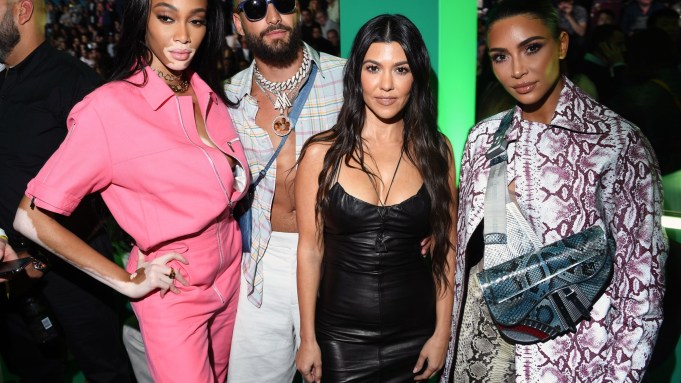 Kim Jones’ pre-fall collection for Dior was one thing Tuesday night — the clothes, the collaborations with Shawn Stussy and Air Jordan — but the celebrity quotient in both the front row and party was a whole other spectacle in and of itself.

Outside the venue, collectible cars served as props for the Miami-tanned models and influencers who preened against them during preshow cocktails. Guests like Fiennes-Tiffin and Maluma were driven up to the entrance, where waiters offered trays of drinks upon arrival outside.

Word of the Shawn Stussy and Dior collaboration had reached the celebrity front ahead of the show.

“Stüssy, it’s like my dream,” said actor Patrick Gibson while waiting near the step-and-repeat. Dressed casually for the show, he noted that he’s heading to London to shoot a movie about a meth addict next year, and still had some weight to lose for the role.

In the front row, people were more crazed for Maluma than Beckham, who sat relatively unbothered next to Moss and her boyfriend, Nikolai von Bismarck.

“I’m so happy to be here,” Beckham, ever the Jones loyalist, offered politely from his seat.

“I mean, I would say he’s the number-one right now,” the Colombian singer said of Jones. “He has a beautiful soul, a beautiful heart and that’s what he shows with his clothing and all the things that he does. So that’s why I say that I love Kim Jones. He inspires me, to be free. Freedom.”

“It’s bringing the youth together with the older generation,” Ricky Martin said of the Jones era at Dior.

The frequent face at Art Basel Miami Beach said he’s all in favor for more fashion shows in Miami.

“It should be done more often,” Martin, who was wearing “underwear Dior, everything Dior,” said. “I live in L.A. now, but Miami is an amazing platform for uniting continents. You have America and you have Latin America. So this is very smart for them to do it here.”

Orville Peck, the evening’s surprise performer during the after party, was dressed in his signature fringed face mask, a Dior custom piece.

“Kim just said, ‘I’m going to make you something’ and then I went and tried it on and it looked great,” Peck said, laughing. “They reached out to me out of nowhere, and I’ve always of course loved Dior. It was a serendipitous moment. I think he’s the most sincere person in fashion.”

This year has been quite the breakout for the Canadian country musician, who released his debut album “Pony” earlier this year.

“Surreal. Pretty rewarding, very exciting,” Peck said of 2019. “I think for the first time in my life I feel very, very, very happy.”

After the show the 1,500 guests — plus 500 more party add-ons — spilled onto the street, where food trucks were open, drinks were passed and music played.

Inside the VIP area, Hadid sashayed about in her pajamas, straight from the new collection.

Stussy, man of the night, was tucked inside the VIP area, shades on, taking in the firework display. How did he feel, watching the final result of the collaboration come down the runway?

“I don’t even know yet. I need to go home, have a beer — I’ll probably lay in bed and vibrate tonight,” he said. “I still was an audience member — does that make sense? Even though I felt part of it, in one sense, I felt like I was an audience member, too. But then I would look and go, ‘oh, there’s my little art, this way and that way.’ That felt really nice.”

Model James Turlington — Christy Turlington’s 25-year-old nephew who launched his modeling career three months ago — was over by the entrance to the Rubell Museum, basking in the postshow glory. He had flown in the night before straight from a shoot in Rome, and hit the ground running: fittings with Jones on Monday night, and on Tuesday backstage met Moss for the first time. Naomi Campbell, he said, had thankfully prepped him for the meeting the last time they spoke with memories.

“They had Thanksgiving together back in the day in Danville, my hometown. It was when they were younger. It was the first time [Naomi] had celebrated [Thanksgiving], ever, and was in Danville, which is a small suburban town in California,” Turlington said. “It was with my grandma and grandpa, and Christy, and my mom.”

Turlington was one of the lucky models to wear the new Air Dior sneakers in the show.

“The shoes? The Jordans? Oh my god, they’re all obsessed,” he said of the models’ reactions backstage. “They’re saying they’re going to sell out in, like, five minutes.”