Celebrities and fashion's elite turn out to celebrate the queen of pop's foray into filmmaking. 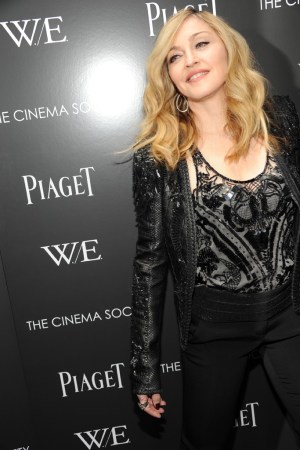 “She’s here! She’s here! Madonna’s here!” a smirking Parker Posey shouted, as she made her way down the red carpet for the premiere of the Material Girl’s directorial debut at a Cinema Society- and Piaget-hosted screening of “W.E.” on Sunday night.

A flurry of epilepsy-inducing camera flashes and chaotic yelps from photographers and fans welcomed Madonna, who arrived to her premiere nearly an hour late. Nonetheless, the pop star, who directed and wrote “W.E.,” a film that intertwines the famed affair of England’s King Edward VIII and American divorcée Wallis Simpson with a fictional modern-day romance between a woman and a Russian security guard, politely fielded questions from the press.

“Making art and being creative is always a challenge,” Madonna told WWD, referring to earlier comments about the difficulty bringing the project to life. “Making a film is all encompassing — there are so many aspects to it, but I think the more I do it, the easier it’s going to get.”

“I think people get you in a box,” said Donna Karan, of the potential criticism that Madonna may face as a filmmaker. “They can’t see anything else but that. I face it, too.”

On balance, the movie was a hit — and revelers, who attended the after party at Crown on the Upper East Side — made sure Madonna knew it.

Partygoers hovered to catch a glimpse of and congratulate the Cavalli-clad queen of pop, who held court in the back of the dimly lit restaurant, as Harvey Weinstein, the film’s producer, surveyed the room and posed for pictures while chatting in a nearby corner with Michelle Trachtenberg and others.