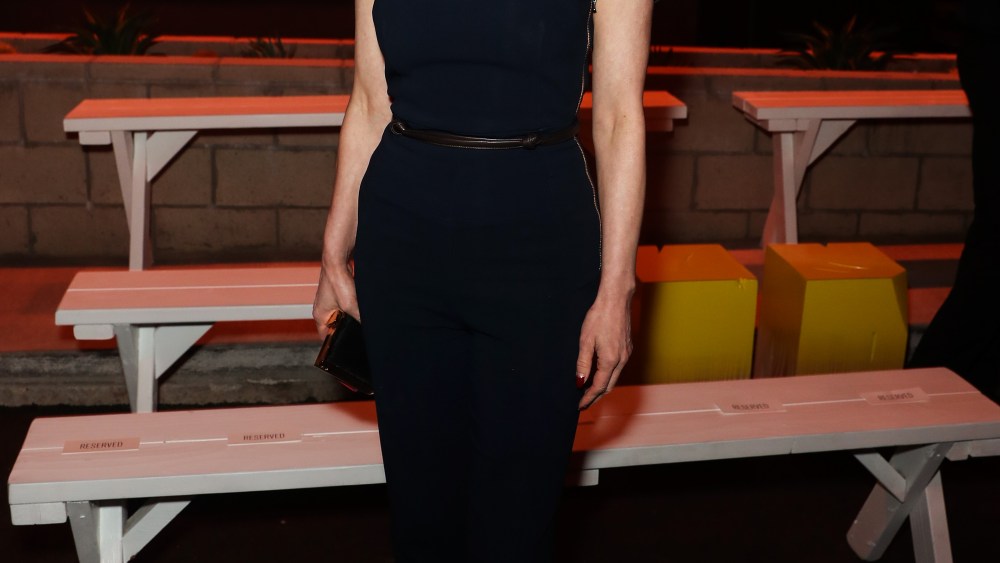 “I like it. This is kind of the way it should be,” said Dita Von Teese, of being outnumbered by the boys at Hermès’ Dwntwnmen extravaganza in Los Angeles on Thursday night.

Apart from the chiseled models, there were also members of L.A.’s cultural elite walking in the show — MOCA director Philippe Vergne and Commune partner Roman Alonso. They drew whoops from the other stylish women in the crowd such as Lisa Eisner, Erica Pelosini and Brigette Romanek.

After men’s artistic director Véronique Nichanian took her bow, Hermès of Paris USA president and chief executive officer Robert Chavez said, “We’ve been dreaming about this evening for more than two years. What better place to be than under the stars in downtown L.A., in a place which most of you have never been before?” He was referring to the on-the-fringe venue — an industrial warehouse next to the train tracks, where the house created an entire luxury compound for one night only.

Axel Dumas, Hermès president and sixth-generation of the family-run company, added, “Thank you to all of you and your GPSes for coming to be with us.” Dumas related that after Hermès first U.S. store in New York tanked in 1929, the company returned and chose Rodeo Drive, “so Los Angeles has a special place in our heart.”

On his command, the crowd filed inside to explore the various interactive exhibits. “That’s my car over there,” joked Wujek of the silver Thirties Voisin parked in the “garage.” As he walked into the game room, where people were excitedly playing shot-clock basketball and ski ball (it was all caught on camera and the GIFs were texted to each guest in real time), Bobby Flay asked, “How’s the food? What’s good here?”

“I’m a big fan of Hermès and I was in town for one of my restaurants, so I decided to come,” he said, eyeing a passed tray of goat cheese crostinis.

People eagerly touched the framed fabric displays and queued up for the “car wash” photo booth, where there were Birkin bag props (closely monitored by staffers). Some, like Insta-famous model Shaun Ross, made several trips to capture more Boomerangs.

At 9:30, people were drawn outside by the sound of Cold War Kids, playing on a landscaped deck out back. It was like a high-end version of Coachella, as delicacies from chefs Ludo Lefebvre, Jon Shook and Vinny Dotolo were being served from an Airstream and a suited-up Andrew Firestone swayed to the music while sipping a bottle of craft beer.

“So what’s it all about?” said Goreski of the event. “It’s a luxury event.”