The burlesque dancer went back in time to conjure up Forties silver screen icons Betty Grable and Carmen Miranda for her latest act. 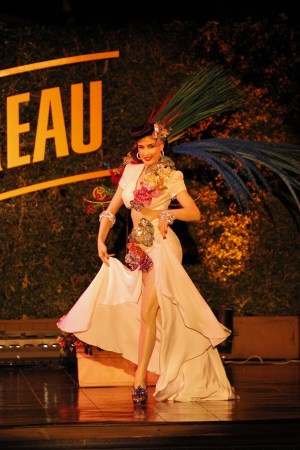 Dita Von Teese went back in time to conjure up Forties silver screen icons Betty Grable and Carmen Miranda for her latest act, which she performed Wednesday night at the launch of the Cointreau Summer Soiree series at the Beverly Hills Hotel. The pool deck, where a crowd that included Mary-Louise Parker, Jeffrey Deitch and Ellen von Unwerth showed up to watch, was appropriately vintage as the hotel celebrates its centennial this summer. For her brand-new costume, Von Teese enlisted London-based designer Jenny Packham, whom she met last year.

“I’d been wearing a lot of her dresses on the red carpet because I really like the beadwork, crystals and embroidery, so when we met, I told her, ‘Some of your dresses would make great stage costumes,’” said the burlesque dancer.

So Packham watched some of Von Teese’s favorite films, “Moon Over Miami” and “Down Argentine Way” to get a feel for the Forties tropical vibe she was seeking.

“When Dita described her performance to me, I was hooked,” said Packham in an e-mail from London. “The outcome is seductive and glamorous in a totally tropical Rita Hayworth style. Dita always takes [my dresses] to another dimension, so it has been very exciting to collaborate.”

Von Teese had equal praise for Packham: “It’s not easy to create stripper costumes, and she did a great job because when each piece comes off it creates a new look.” The creation has eight pieces, including a long skirt, a sarong, a bolero jacket, a crystal headpiece, a beaded bra, beaded corset, orchid panty and mini bra.

“We did the mini bra to make the show PG for America, because they don’t always understand the pasties and G-string,” said Von Teese.

The shoes were Christian Louboutin embellished with Swarovski crystal orchids, the Michael Schmidt earrings and bracelets were also made from Swarovski crystal mesh, and the feather fans were designed by her friend and fellow burlesque dancer Catherine D’Lish, who has helped create the looks for nearly all of Von Teese’s numbers over the past 12 years. The music, composed and arranged by Chuck Henry, included classic Martin Denny tunes.

Von Teese said she’ll add the number into her permanent repertoire, which she is currently taking on the road in an hour-and-a-half-long revue called “Strip Strip Hooray.”

But Von Teese is keeping busy with her other creative endeavors, including launching her second fragrance in Europe and her dress line, Muse by Dita Von Teese, at Decades in Los Angeles this fall. She also has a lingerie line in Australia and a makeup line in Germany. “I feel like I have ticked all the boxes of products I can speak about strongly,” she said, adding, “There’s no jeans line of course.”