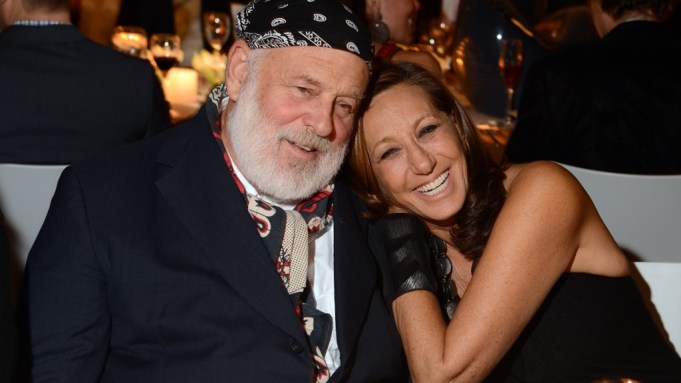 The holiday dinner ACRIA does every year, always tastefully arranged, always observed by an influential crowd, is a rite of passage that perhaps long ago stopped surprising. It doesn’t have to. People attend because it’s for a worthy cause, AIDS research, and because many of their friends are involved.

A worldly group of people that isn’t fazed by much was in attendance Wednesday night at the Urban Zen Foundation in Manhattan — Calvin Klein, Kelly Klein, Donna Karan, Sam Peabody and his daughter Elizabeth, Bernadette Peters, Sheila Johnson, Darren Starr and Francisco Costa.

But when Jessye Norman, regal in an elaborate gown, rose to deliver remarks, one could hear a pin drop. Table conversations stopped, forks went down and the room was still, silenced by the privilege of an audience with the diva.

Norman was paying tribute to the late Judith Peabody and she talked like….this…enunciating…each…word. It left the room hanging on her every turn of phrase as if she were still on an opera stage, one towering grand dame tipping her hat to another.

“Our Judy made sure to leave a mark on this world of ours so that we would know and generations to come would know that Judith Dunnington Peabody walked this earth and left the imprint of a caring, a sensitive, noble woman. A caring. Sensitive. Noble. Judith,” Norman said.

Peabody, who died in 2010, was a socialite who was revered for her, uncommonly early and lasting, philanthropic work on behalf of AIDS patients, a cause her daughter has continued to support.

“People have a tendency to get very lax. I think it’s important to keep it all going and hopefully find a cure,” Elizabeth Peabody said.

Norman and the Peabodys have been friends for many years, Peabody said, first as fans of the singer’s performances and later developing a close friendship.

“She and I are like sisters. She’s a great spiritual force as well as an enormous talent,” Peabody said of the singer. There were other honorees besides Peabody Wednesday — Martha Nelson, the former Time Inc. editor in chief, and the artists Rob Pruitt and Jonathan Horowitz, and they all had to contend with that unique challenge familiar to opera singers the world over.

“We were sitting at our table when Jessye Norman was speaking and I was thinking, ‘We did something very bad in a past life that we had to follow Jessye Norman,’” Nelson said. She became involved with the organization 20 years ago when she was editor of InStyle, which, following tradition, again presented the dinner and the accompanying silent auction, which featured works by Ed Ruscha and Robert Mapplethorpe.

“I always think of this dinner as a magical web that connects all the strands of my life, journalism and media, arts and fashion, and of course, anyone who has anything with ACRIA,” she said. It had been just less than a month since Nelson, who was hard to reach as she was besieged by well-wishers, including Calvin Klein and Karan, left Time. Was she enjoying her time off?

“I certainly hope so. I’m enjoying mine,” Klein offered.

The dinner has become such an important ritual that it draws heavyweights from all sorts of industries and trades. Walking among the very dignified and stately crowd was Michael Lucas, the adult film kingpin.

“Probably my favorite photograph that I have is by Richard Avedon,” he said. “It’s a photo of Rudolf Nureyev absolutely naked, one of 10. That was a very good buy. I bought it for $12,000 and one of them just sold for $78,000.” Shortly after speaking, Lucas headed for his table. It was time for Norman to take the stage.