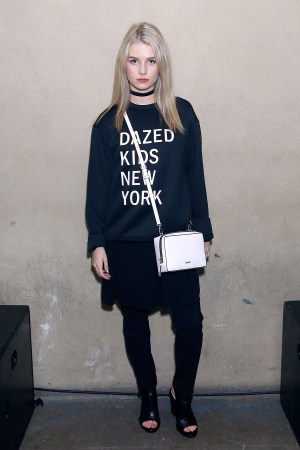 If the previous party that DKNY hosted in London was anything to go by, the bash it threw with Dazed & Confused magazine on Thursday night was destined to become the stuff of legend.

Almost exactly two years to the day since the party that the brand threw in cahoots with Esquire, for The London Collections: Men, where the booze dried up long before the party was due to end, an ambulance was called and, rumor suggests, one couple got very jiggy with it in full view of the party, DKNY was back — this time celebrating the launch of the #DxKxNxYx capsule collection of acronym sweatshirts.

The sweatshirts were first seen in the finale of the brand’s fall 2016 runway show, the second outing at DKNY for designers Dao-Yi Chow and Maxwell Osborne, who sent out catchy black-and-white statements like “Designers Know Nothing Yet,” “Don’t Knock New York” and “Dazed Kids New York.” Naturally, Jefferson Hack, Dazed & Confused magazine’s co-founder and publisher, was pleased with the latter.

“Jefferson came to the show, and he was really excited about the “Dazed Kids New York.” And the conversation started there. He loved it so much, he framed it and put it up in his office. And, as we’re in the process of rebranding [this party] was the perfect opportunity to do something with Dazed,” said Chow.

WWD didn’t notice any acts of public lewdness at the party, but there was mayhem enough to keep security busy. White sweatshirts bearing the slogan “Dazed Kids New York” had been thumb-tacked to walls, and light-fingered guests saw fit to appropriate them, much to the chagrin of guards who would rescue the sweats, only to have them liberated again in short order.

“We want people to steal them!” exclaimed Chow. “That makes for a better party. Jefferson says if you can’t afford it, steal it. It’s one of his 26 mantras in his new book (‘We Can’t Do This Alone’).”

“That’s why the sweatshirts are up on the walls. We want people to feel brave enough to take one,” said Hack, adding the party was intended to be a “New York/London mash-up. We wanted to combine our two tribes.”

The sweaters and T-shirts feature the acronyms “Designers Know Nothing Yet,” “Dazed Kids New York” and “Don’t Knock New York,” and are available now at Harvey Nichols, Harrods, Brown Thomas, DKNY Old Bond Street and DKNY.com for 225 pounds (or $298 at current exchange).