The exhibitions open to the public today. 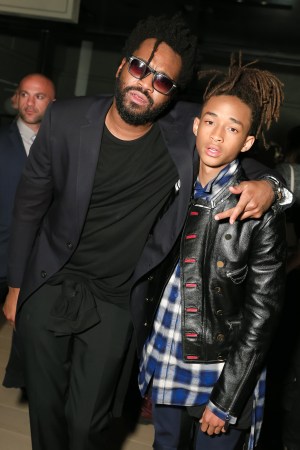 What did DKNY’s Maxwell Osborne and Dao-Yi Chow do to recuperate the day after the Met Gala?

The designers hosted a low-key dinner affair at Spring Place to toast the opening of New Museum‘s spring exhibitions presented by The New Women’s Project, for which DKNY is the main sponsor. The party also served as an unofficial pre-game for the Frieze Art Fair, which begins Thursday.

“It’s one of those things you don’t realize because the Met is such a big thing, and this is such a big thing, that you aren’t even thinking,” said Osborne, nursing an Oban on the rocks. “Last week it really dawned on me, ‘oh f–k this is the day after the Met.’ Ahead of time you’re like yea, whatever, it’s easy.”

Fellow Met Gala revelers who were out for the second night in a row included Jaden Smith, Waris Ahluwalia, and Mia Moretti and Margot, who co-DJ’d the party — technically making their attendance a work event. Romee Strijd, Alexandra Richards, Maria Baibakova, and Michael Avedon were also roaming around the new private club space adjacent to Spring Studios.

“I slept and was able to take my son to school in the morning. Max…maybe was coming home when I was up,” divulged Chow. The designers had dressed Nas in Public School the night before, which Chow described as a career highlight. (“Who would guess at the Met Gala there’d be all these Nas fans?” he remarked.) Supporting the New Museum falls into a similar highlight category.

“The New Women’s Project is near and dear to our hearts, because it’s a project that embodies our journey as well, as emerging artists that get a platform,” Chow explained. “Now as DKNY, we’re able to provide a platform similarly to female artists,” he continued. “The museum has really been like our backyard museum. There’s all of these synergies and good spirits.”

“It’s a really good time to show the work because there’s so many people here from all over the world,” remarked Polish artist Goshka Macuga, who noted that The New Women’s Project marks her first museum show in New York. “I have very positive feelings about the whole thing. It’s like a real celebration.”