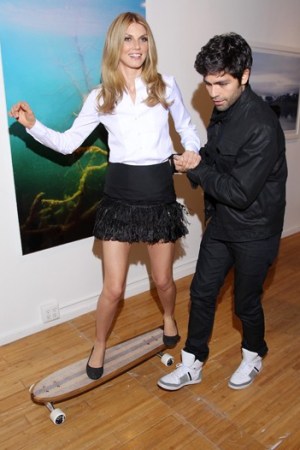 Adrian Grenier of “Entourage” fame headlined the opening Thursday of a pop-up gallery displaying eco-friendly art and other wares at 112 Greene Street in Manhattan.

The event, which kicked off the exhibition that runs through Saturday, was put on by DKNY and spotlighted its new environmentally friendly fragrance Pure — and was meant to raise awareness for Shft.com, an organization begun about a year ago by Grenier and producer Peter Glatzer.

Another party person was model Angela Lindvall, who appears in advertising for PureDKNY, created in collaboration with Donna Karan’s fragrance licensee, The Estée Lauder Cos. Inc. Also in attendance was Mark Weber, chairman and chief executive officer of Donna Karan International, which is part of LVMH Moët Hennessy Louis Vuitton.

Shft’s mission — the organization is described as an “environmental new media” forum — is to be “a platform where culture and art meets environmental thinking,” Grenier said. “It started out as a friendly exchange among people who care about these things and Peter and I started talking about how we could participate on an individual basis. And that developed into creating [Shft].

“We share art and culture and we figured, why can’t a sustainable lifestyle be embedded in what we do anyway?”

More than 50 pieces of sustainable goods and art designed by creators around the globe are featured. There are paintings, sculptures, photographs and such things as a clock that runs on the citric acid of lemons (battery-free), plus calculators as well as stools topped with scores of wine corks.

Lindvall was seen being pushed through the gallery by Grenier atop a wooden “sustainable” skateboard.

The gallery and shop is curated by Edie Kahula Pereira.

Grenier and Glatzer teamed with “eco-design expert” Lauren Gropper to build Shft.com in order to create awareness of an ever-increasing amount of sustainable choices and to highlight today’s cultural shift toward eco-living, according to executives.

Pointing to the fragrance, dozens of bottles of which were used to create a chandelier in the space, Lindvall said, “We’re supporting women in Uganda through a [poverty fighting] organization called Care. The signature scent in the fragrance is vanilla. And they’re sustainably harvesting the vanilla, which is supporting the communities there.”

The glass of PureDKNY is 100 percent recyclable, and the carton is printed with low-VOC inks on certified forest paper and wrapped with a biodegradable wrap.

Added Lindvall, “I’m starting to work with companies that I’ve had long-term relationships with and it just feels really good that my passions and my career are aligning. DKNY is taking these small steps to make a big difference.”

She noted that she appeared in a 13-episode television series on the Planet Green channel that was produced by Glatzer and Grenier called “Alter Eco.”

Karan stated, “PureDKNY speaks to the core essence of who I am and what I want to touch — the people and children I love, and being at one with nature. It’s about those little moments that bring you joy, pure and simple.”