On Thursday night, Net-a-Porter.com and Mr. Porter threw a bash at the their London headquarters to mark the designers’ debut on both sites. 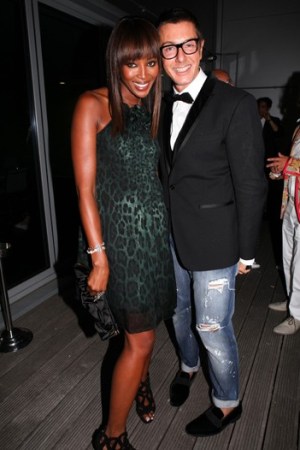 “Head to toe baby. Head. To. Toe,” declared Queen Latifah, pointing to her Dolce & Gabbana tuxedo at a party to celebrate the design duo in London. “When I wear Dolce and Gabbana I always tear it up. It makes you feel so confident and sexy, even if you’re wearing a suit.”

On Thursday night, Net-a-Porter.com and Mr. Porter threw a bash for Domenico Dolce and Stefano Gabbana at the companies’ London headquarters to mark the designers’ debut on both sites.

“I feel almost Sicilian when I wear Dolce & Gabbana, like a proper Italian woman,” said Campbell. Knowles, meanwhile, had just returned from a holiday with her son Daniel in Paris.

“I’ve been chilling my behind off, hanging out at Place des Vosges, eating, and drinking wine,” said Knowles. “It’s been amazing.”

Gabbana’s thoughts were on his upcoming holiday: “We’re spending the summer first in Stromboli in Sicily, then in Ibiza. The first for relaxing, the second for fun.”

Meanwhile, Natalie Massenet, Net’s founder who was dressed in a black, strapless dress by the designers, offered up some wardrobe tips in anticipation of her upcoming trip to Mustique with her two daughters.