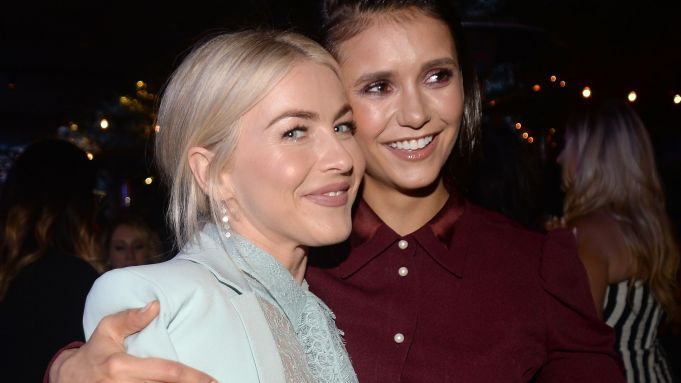 A slew of Emmys nominees and stars such as Dolly Parton, Nina Dobrev, Felicity Huffman and Alexander Skarsgard began the weekend at Variety and Women in Film’s annual fete, held Friday night at Gracias Madre in West Hollywood.

“It’s a vegetarian restaurant, but I hear the drinks are fabulous,” a friend told “The Americans” star Alison Wright. “I’ll have a glass of Cabernet,” replied Wright. “This part of it is fun, but it is work, in all honesty,” said the British actress. “The show has been on for five seasons but it’s only become mainstream in the last two years.” Still, Wright said she owes “everything” to the FX spy series. She’s currently filming a pilot for “Snowpiercer” in Vancouver with Jennifer Connelly. “It’s the best script I’ve ever read,” she said.

Elsewhere in the packed restaurant, Julianne and Derek Hough chatted with Sterling K. Brown. “We can dance, you know,” said Brown, perhaps angling to get on their show “Dancing With the Stars.” Like Kiernan Shipka and Sarah Hyland, the Houghs were also obliged to stop at their agency parties that night, as well as Entertainment Weekly’s annual fete. “Tomorrow is when I’ll decide what I’m wearing on Sunday,” said Julianne.

NBA star Dwyane Wade, who accompanied wife Gabrielle Union, was decidedly low-key, since not as many guests recognized him as much as his actress spouse. Wade came wearing burgundy pajamas by Waraire Boswell and a black blazer by A. Sauvage, and said he didn’t mind playing second fiddle. “It’s fun. You get to hear people talk about different things and I always meet interesting people.”

Union, who is the star and producer of “Being Mary Jane,” said, “Yeah, he didn’t find it. My stylist did.” She said her next stop was the CAA part. “It’s actually at our hotel. We felt like a–holes walking by the press line on our way out, but we’ll end up there tonight.”