The LVMH Moët Hennessy Louis Vuitton SA company staged a lavish dinner with Alain Ducasse, ahead of the launch of a collection of Dom Pérignon's P2 experiences worldwide. 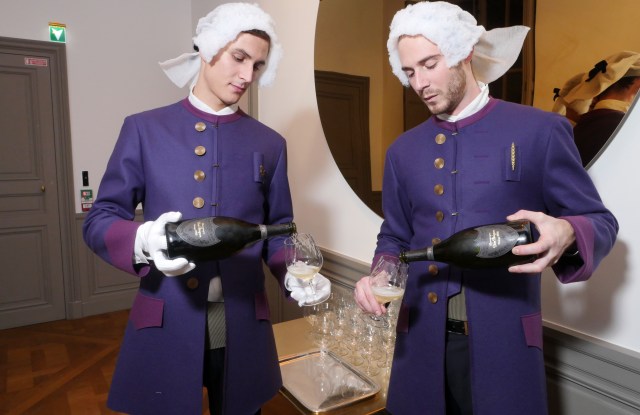 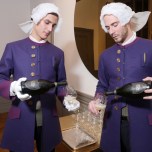 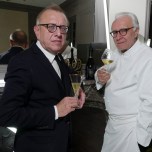 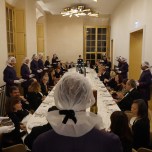 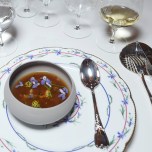 Some 36 guests attended the lavish dinner on Tuesday night in Ore, Alain Ducasse’s new restaurant located in the Dufour Pavillon boasting views onto the palace’s cour royale and cour d’honneur.

The event kicked off a series called “Dom Pérignon P2 ultimate experience dinner by Alain Ducasse.” (Ore, which means “mouth” in Latin, is available for private events at night and will feature the Dom Pérignon P2 option starting in January. During the day, the place which Ducasse describes as a contemporary café closes at the same time as the Château, which is 5:30 p.m. in the low season and 6:30 p.m. in the high season.)

After a private visit at night of the Château, guests were escorted to Ore’s salons to sample the Champagne in handmade Bordeaux and burgundy glasses. The libation was poured by waiters sporting a redingote–style purple jacket festooned with a fleur-de-lis-shaped brooch, white shirt and white headdress. The Champagne was served at different temperatures to highlight its “minerality, intensity and precision.”

“Louis XIV and the monk Dom Pérignon were two exact contemporaries,” said Richard Geoffroy, cellar master at Dom Pérignon, an LVMH Moët Hennessy Louis Vuitton SA company. One of the official merchants, who enjoyed a monopoly on the supply of wine to Louis XIV’s household, regularly bought wine from the Dom Pérignon abbey of St. Peter in Hautvillers in northeastern France. “Pieces of evidence of billing have been found,” Geoffroy noted.

The dinner menu inspired by the court included frog croquettes with a sorrel dressing; scallops and caviar; a spelt, artichokes and truffle dish, and bouchée à la Reine, a classic French dish consisting of puff pastry with poultry, mushrooms and bechamel sauce. It was served in replicas of Marie Antoinette’s tableware. The Ancienne Manufacture Royale, now owned by porcelain-maker Bernardaud, reedited historic services for the occasion.

Ducasse called the process of revisiting royal dinners fascinating. “We collected [information] from the heritage officers specialized in menus, tableware, habits and customs, dinner sequencing,” he explained. “There are specialists for everything at Versailles. We drew up a synthesis to create the experience.”

“It’s likely that the King ate warm to cold [food] due to the distance with the kitchen. The court was eating colder and richer than we eat nowadays,” Ducasse added. “It’s an inspiration, not a caricature of history.”

While concessions were made to contemporary diners, dishes were served warm rather than hot and after 10 courses, some guests swore to the Sun King they would fast the following day.

All dishes were created with the Dom Pérignon’s P2 Champagne 1998 millésime in mind.

P2 stands for second plenitude while “1998 is by all means a warm year, a ripe year, which is now translated into something rich enough; it’s about the chew, the expansion. That middle-palate quality is the signature of 1998, not to mention the aromatics,” explained Geoffroy.

The cellar master said he was “moved” by the pairing with the first dish — a broth with shellfish and crustaceans — whose “extreme iodine elements sent the wine to its edge, revealing its fruity notes, almost like a zest, which is so 1998.”

“It was punchy, spicy at it should, a strong lead,” agreed Ducasse. “I am very pleased,” he said, relaxing after the very special shift and getting his first sip of Champagne. For the chef, 1998 was a good year too: he twice scooped three Michelin stars that year.

“This tonight happens to be the prototype, the format of new things to come,” said Geoffroy.

Following Versailles, Dom Pérignon plans to create a catalog of P2 experiences around the world, set to launch next year. The bar is high after the Château de Versailles. So could the moon or planet Mars be the next venues? Ducasse would be ready to take up the challenge: The chef has already concocted the dishes for French astronaut Thomas Pesquet when he leaves on Nov. 16 for a six-month mission on the International Space Station.