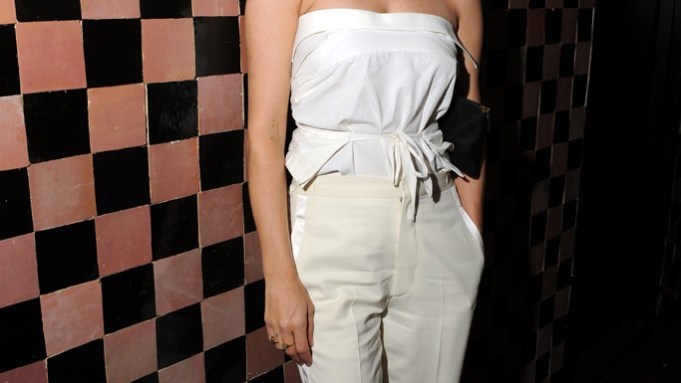 On Wednesday night, Dom Pérignon coupled with Rita Ackermann and French symphonic composer Koudlam for an informal Champagne-soaked dinner at Manhattan hot spot Acme to fete what winemaker Vincent Chaperon called “the power of creation.” The storied Champagne house has been making advances toward the art world over the past decade, with Andy Warhol-inspired bottles in 2002 and a more recent project with David Lynch. The filmmaker spent two days in a darkroom with a bottle of Dom Pérignon Rosé (vintage 2000) and Dom Pérignon Blanc (vintage 2002), creating two portraits available on the Champagnes’ Web site.

Ackermann’s installation (a video of several videos on a computer screen playing simultaneously) was projected silently on the brick walls. “The stars aligned,” Chaperon continued. “Rita Ackermann is here, Koudlam is here, we’re here.” On one wall teenyboppers mouthed along to pop songs, on the other Muammar Gaddafi gave a speech. Johan Lindeberg, Zani Gugelmann and Michael Stipe were on hand at the festivities.

Chloë Sevigny was seated facing some bright young YouTube sensation in 2-D, near Adi Gil and Gabi Asfour. “They aren’t changing the videos,” she noted. It was true, each wall had the same section on loop. “I like the way it looks projected on the bricks,” Doug Keeve said as he snapped photos of tablemates on his iPhone. Keeve, of “Unzipped” fame, has been working on a series of videos for the CFDA, as well as workshopping a reality television show about psychics. “They’re young, they go out at night and then get up and do readings,” he said. “It’s sort of ‘Sex and the City’ meets mediums. But not terrible.”

Ackermann is known for being something of an ‘artist’s artist,’ and Terence Koh, Aaron Young and Nate Lowman were among those who turned out to support her. “I’m here because of Rita, she’s great,” Lowman offered, turning to watch the wall for a beat. “I haven’t seen this work before,” he said. “Are they serving anything other than Champagne? I think I’ve been hungover twice, and dinner isn’t over yet.” They weren’t, though Chaperon assured the party that the vintage was “bien.” As dinner wound down, the downstairs bar at Acme steadily began to fill for Koudlam’s performance. Laure Heriard Dubreuil navigated the crowds in a floral Celine jumpsuit. “I had to bring the sunshine,” she grinned of the print, as Koudlam donned his sunglasses and took to the far end of the room. “These gray days can be depressing unless you make an effort.” That’s what parties are for.