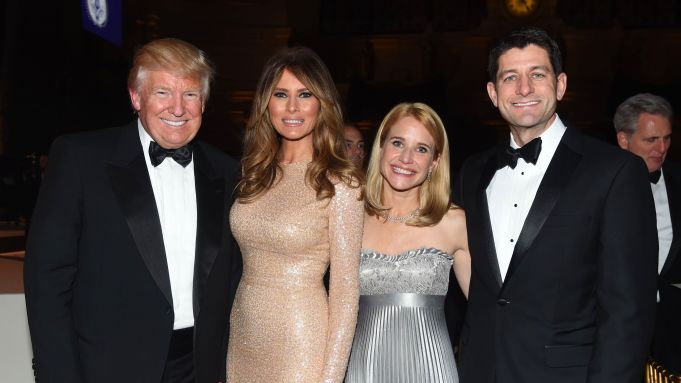 Dubbed simply the “Candlelight Dinner,” the black-tie gala held in Union Station served as the Trumps’ formal introduction to Washington society and perhaps exemplified an attempt at a détente for a divided country.

While the decor hinted at unity and a new beginning, Trump did not miss an opportunity to take a jab at Democrats in his televised remarks, touting his cabinet nominees, many of whom faced tough questioning from senators this week on Capitol Hill.

Just hours before his swearing-in as the 45th President of the United States, Trump boasted about his electoral victory and seemed to be thinking ahead to his reelection in four years.

“The next time we’re going to win the old-fashioned way,” he said, claiming it would be a victory based on a solid record.

He also quipped about the rain in the forecast on Inauguration Day, saying he wouldn’t mind “because people will realize it’s my real hair.”

At the red carpet arrivals prior to the dinner, former Mayor Rudy Giuliani, Trump’s new cyber security czar, said the president-elect has always been a big supporter of the fashion industry — and will continue to “do a lot for them.”

“The administration will probably bring in a lot of different styles,” he said. “You’ll see people copying things that they wear as they did with Jackie Kennedy,” he predicted about Melania Trump’s sartorial choices.

But Giuliani was quick to note that as the chairman of Trump’s new cyber security task force, he will make sure they “can’t hack dresses.”

House Majority Leader Kevin McCarthy (R., Calif.) said, “Who knows?” when asked who designed his tux for the evening.

But he was far more definitive about the significance of the inauguration.

“This country celebrates the changing of the guard in one of the most secure methods that we do. Other countries don’t do it as peaceful as this country,” he said. “To me [the election] turned out the way I wanted it to. To others, it didn’t but it’s the way you celebrate it all so there is a lot of excitement.

“There is a lot of celebration going on. It’s been a long time,” McCarthy said of the Republicans taking over. “People worked hard in getting together and celebrating the battles they go through and tomorrow we will celebrate the transfer of power. Then the work begins.”

Winston Wolkoff, who spent just seven weeks pulling together the inaugural events, said her team has been “orchestrating the impossible” and at the same time “hopefully unifying our country in a way that can bring together all of the forces that need to.”

“I’m hoping that tonight is just a snapshot of what Mrs. Trump will bring to the White House,” she said. “Myself and David Monn together really felt the importance of her look and feel and touch on this evening.

“In discussions with her we created this Camelot moment that genuinely portrays who she is. Overall you look at her as a beautiful, impactful woman who has genuinely I think made a huge impact on the fashion industry.”

As for the incoming FLOTUS’ personal style, Winston Wolkoff said it pays “homage to the designer and to the people that are all American designers.”