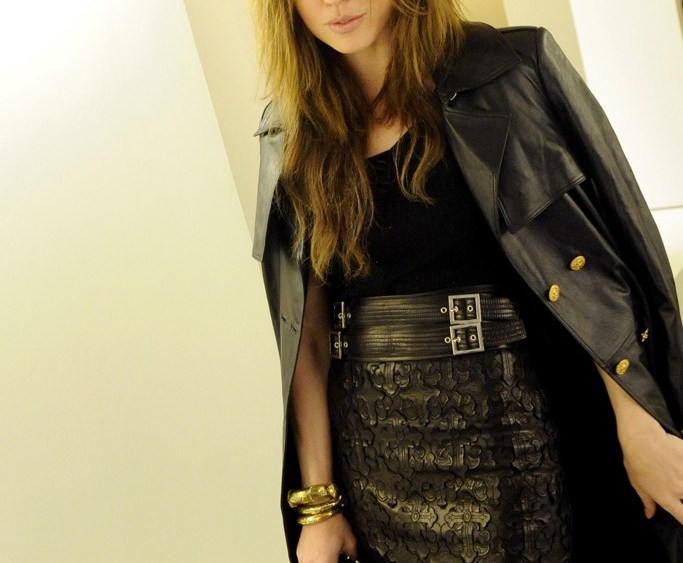 “We were just talking about that actually,” Christopher Kane said on Wednesday night when asked about the guest list at a store-opening party for Versace’s new SoHo shop, Versace Vibe. “We can’t tell you who we’re talking bout.”

Donatella Versace herself handpicked Kane — her Versus codesigner — to serve as the first curator for the new store. WWD wondered, given her considerable Rolodex and influence, if the Scottish designer’s input had extended to the opening party invite list.

“You know, I don’t have to say anything,” he smiled. “Donatella knows everyone. Everyone comes to Donatella.”

It was an understatement. Kane had been chatting with Claire Boucher, better known as the buzzed-about lo-fi electronic-music artist Grimes. Behind them, a steady trickle of famous faces, including Bar Refaeli, Kanye West, Linda Evangelista and Jennifer Hudson made their way to pay their respects to Donatella Versace. In addition to the celebrity crowd, the Mercer Street space was filled to near capacity in spots with editors, models and the usual fashion hangers-on. The proceedings felt at times like a sort of papal audience by way of South Beach.

“I was freaking out today,” Versace said, taking a break from the welcome wagon. “I was sure [it] wouldn’t fit in the store, but I guess you can do different invitation, different time.”

Later in the evening, an even more select few joined the designer in her expansive suite at the Waldorf Towers to continue the celebration over dinner. Princess Charlene of Monaco, Gerard Butler, Sting and Trudie Styler, Melissa George and Tommy and Dee Hilfiger all stopped in at some point during the evening. None made as big an impression as a brief party crash by a relatively dressed-down Lady Gaga, who bounded into the room in an understated black dress and face-shrouding fur-trimmed hat. “It’s Chanel,” she boasted to one guest who complimented the fuzzy chapeau, as Donatella feigned disapproval.

“I can’t wear Versace all the time,” Gaga explained.

Around 10 p.m., with Gaga long gone, Grimes and her band put on a short set and had much of the crowd — including Hanne Gaby Odiele, Maxwell, Tali Lennox, Kasia Struss and Ellen von Unwerth — crowding around her keyboard in a corner of the room. With its purple lighting and visual projections, the show would have looked more at home in a Bushwick warehouse than the neo-Grecian trappings of the top of the Waldorf. Still, Versace was front and center to thank the singer after the set. It was right in line with the sort of unofficial motto the designer had proffered to WWD earlier in the evening.

“You can make [a] party wherever you want.”