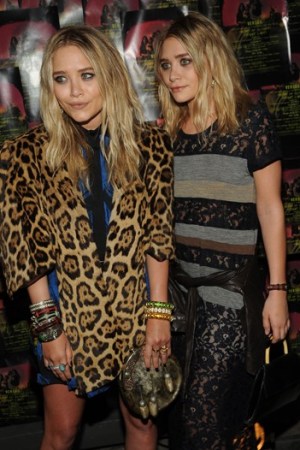 Friday nights are usually a veritable Sabbath for the party crowd after a long week of back-to-back bashes. Not when Donatella Versace is in town.

Along with co-designer Christopher Kane, Versace and her relaunched Versus line hosted the Art of Elysium’s Bright Lights bash Friday night at Milk Studios, with support from Dasani and MAC & Milk. A downstairs back space entered via a loading ramp on 14th Street was tricked out like an old-school nightclub with long white banquettes, a packed bar and ceiling-high flat screens projecting images of model Ginta Lapina in Versus designs (the model was also in attendance, sporting a cut-out blue number). Joy Bryant, Victoria and Vanessa Traina, Alexa Chung, Mary-Kate Olsen, Alexandra Richards, Alek Wek, Giambattista Valli and Peter Dundas milled around.

Kane, who seemed happily overwhelmed by the spectacle, was still beaming from his visit earlier that day to an Art of Elysium workshop (the charity provides creative activities for kids suffering from medical conditions).

“I left feeling like, How lucky am I? These kids are so vulnerable, so brave and amazing at the same time and it was so inspiring so I was like ‘Why do we ever complain in our lives when actually this is like such a great cause and these kids are the bravest people ever?’” enthused Kane, who spenet the afternoon making felt Barbie doll dresses with children. Having just arrived in New York a couple of days earlier, he was also taking in the It girl scene surrounding him. “London girls, they really want to make ends meet. What I’ve noticed in New York is there’s really a lot of high polish. They really take a big interest in the brands.”

Versace herself has a deep affection for the city—the first Versus show in 1990s was held in New York—so she was pleased to be bringing the line’s chic to a new generation. “It’s a very New York collection. It’s very international, it’s very flash of culture, it’s very rock ‘n’ roll. I think one day if we want to do the runway again, I think we’ll do it in New York,” said Versace, adding of the quintessential New York chick, “They’re hot, they’re hot and [have] no fears.”

It was certainly steaming up inside the party space—literally and otherwise. Naomi Campbell and paramour Vladimir Doronin hung out on a banquette with Allegra Beck as a slew of beefy, presumably Russian bodyguards looked on. And just before Estelle took to the stage to perform her hit “American Boy,” Janet Jackson showed up, huddling in a corner to chat with Versace.

“I would normally never go out on a Friday night,” said one guest staring at the duo. “But that’s pretty major.”