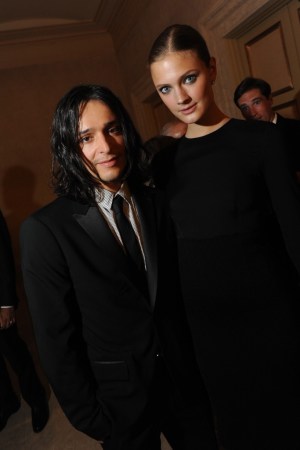 “I have no idea why I’m being honored,” Peter Beard admitted, without a whiff of self-deprecation, on Tuesday night. The photographer was among a diverse clique of creatives (fellow honorees included Swizz Beatz, Donna Karan and Carrie Mae Weems) being acknowledged for their contribution to the arts at the Gordon Parks Foundation’s gala at The Plaza hotel in New York. “Honoring a photographer blows my mind,” Beard continued, with genuine bemusement. “I’m being honored for doing what I like to do. But I’ll go along with it.”

Fellow honoree Swizz Beatz, in an amalgam of Gucci, Saint Laurent and Dior, was equally humble. “It’s an honor to be honored,” the producer said in the hotel’s terrace room during cocktail hour. “I want the younger culture to know who Gordon Parks was. So me being here is hopefully starting that conversation, getting them to Google him and do their homework.”

Olivier Theyskens and date Constance Jablonski whispered in French to one another and snickered by the elevators. A towering Carmelo Anthony got an aerial view of the crowd. Nearby Kick Kennedy told friends what was next on her acting docket. “I’m working on a play,” she demured, though she was not divulging any further details. Sofia Vergara frantically darted around the room. “I’m looking for my boyfriend. I can’t find him,” she stammered. A late-arriving Karlie Kloss swept in just as guests were taking to their dinner seats.

The evening opened with an auction of select Parks photographs. Before it was sold off (to the tune of a cool $16,000) “Department Store, Mobile Alabama, 1956,” a print from Parks’ photo essay for Life magazine documenting segregation in the south, was presented to Joanne Thornton Wilson, the subject of the image. In it, Wilson stands with her niece in front of a store entrance, which has marked a separate entrance for blacks. “Gordon was from the North so I had to tell him all the things we could do and the things we could not do,” Wilson told the room. “I felt his pictures would show the nation what it was like and would start to ring a change for us. I’m so proud of his work.”

Another standout auction item was a ticket to the Chanel spring 2014 show, no doubt donated by Karl Lagerfeld, a cochair for the evening. The designer was a no-show for the event much to the chagrin of waiting paparazzi outside. (“Is he in there? No? Are you sure? What about Sofia Vergara?” they asked those popping out for a quick smoke between courses.)

After words from Theodore Stebbins, who introduced Beard, and Tommy Hilfiger, who introduced Swizz Beatz, Calvin Klein took the dais to present Karan her award. “First, I have to make an admission,” Klein prefaced. “When it comes to Donna Karan, I’m terribly biased. I think she’s so fabulous and deserves every award and accolade that she’s ever received.” Karan took to the stage moments later. “He’s a real piece of work, isn’t he?” she cracked.