The former president was among the inaugural recipients of the Urban Zen Stephan Weiss Apple Awards at a dinner on Thursday. 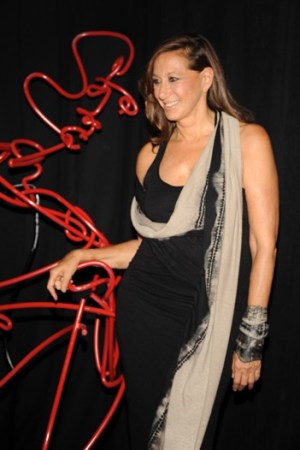 On Thursday night at the Urban Zen Center in the West Village, Donna Karan got a little, well, zen.

“Nothing that you plan is what it is,” she said on her way into the first annual Urban Zen Stephan Weiss Apple Awards, which were running a little behind. “I have to be in there now… at this point, you’ve got to let it go.”

Karan gave a large smile. The thunderstorm raging outside wasn’t helping with the schedule, but it thrilled her.

“His nickname was Storm,” she said of her late husband, the award’s namesake. “The fact that he’s here with us tonight in a storm is beyond anything, I mean it’s like, I know when he’s making that call.” According to the prepared materials, the award is meant to honor those bringing mind, body and spirit into the foundation’s initiatives in healthcare, education and the preservation of culture. A crush of Karan’s famous friends, including Michael Douglas, Demi Moore, Robert DeNiro and Uma Thurman had turned out to celebrate. Bill Clinton, the boldest name of the evening (and along with Dr. Mehmet Oz and Courtney Ross, one of the honor’s inaugural recipients), took a more stealth route to dinner, where interviews, a security guard warned, were strictly forbidden. It seemed that asking those who might get a shot at the former president what they’d speak to him about was the closest WWD was going to get.

“I’d probably ask him about some of the environmental issues that have come up recently,” Sarah Jessica Parker explained.

So nothing about the dishier goings on this week? “I’m not interested in bringing that up with the former president — no not at all,” she said. “It’s simply not my business and nor is it proper dinner conversation.”

Keith Richards, who arrived with wife Patti Hansen, said he had some unfinished business with Clinton.

“I left off a conversation with him,” he said. “I think it was about saxophones and about which are the best reeds to use. And he gave me some tips. He’s a musician, you know? We talk music. I mean, he’s a rocker.”

When time came for Clinton’s acceptance speech, it seemed reeds was the only topic he didn’t touch on. For half an hour the former president waxed on matters that ranged from his relationship with Karan (“Once I got Donna’s clothes on, I had street cred in Washington”) to the latest findings in genetics and molecular physics to aid work in Haiti. Despite the room’s rising temperature, the audience stood mostly at attention.

But as the evening wore on a little longer than expected, and Clinton’s co-recipients each accepted their honors, guests began to trickle out onto Greenwich Street a bit ahead of the official close of the night.

They could be forgiven for being in the now.