Donna Karan Hosts ‘Perks of Being a Wallflower’ Screening

The designer opened up her Hamptons estate to some very famous friends. 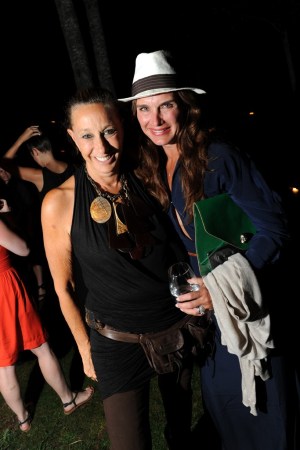 When Donna Karan says her girlfriend Barbra is a houseguest for the Labor Day weekend, it’s Streisand she’s referring to. “She’s stayed here for many years. I always see the white house as Barbra’s house,” explained Karan of one of four houses on her East Hampton estate, which stretches along endless yards of waterfront in an out-of-the-way enclave overlooking Gardiners Bay.

Streisand and James Brolin, along with Sir Paul McCartney and Nancy Shevell, Howard and Beth

Stern, Katie Couric and Rachel Zoe were among the guests at the Cinema Society screening of “The Perks of Being a Wallflower” at Karan’s sumptuous, torch-lit domain. The film, an adaptation of a popular teen novel exploring the revelations and heartbreaks of American adolescence, sparked plenty of memories of teen angst, even among this self-assured crowd.

“Bad hair, no dates,” insisted Brooke Shields of her time at the Dwight-Englewood school in New Jersey. “I had just made ‘Blue Lagoon’ so nobody was going to ask me out. I was just avoided for a while.” However, Shields happily made some social inroads upon joining the cheerleading squad. “I had pom-poms. It was, ‘Go, go, go; beat, beat, beat; Stony Brook, Stony Brook!’”

Barry Manilow, who arrived with Lorna Luft, was spending his first summer ever in the Hamptons. “I was a musician, but a geek musician,” he recalled of his high school years. “When I discovered music in the orchestra class, I knew that I was solid. Everything else was boring.”

Streisand and McCartney’s pubescent years went unlearned, as press was forbidden from posing any questions to them at the screening and dinner (and photographers from snapping their pictures), which was served on a single table running the length of a pool and catered by Gabby Karan and Gianpaolo de Felice’s Tutto il Giorno restaurant. Also on hand for the evening, which was sponsored by The Hollywood Reporter and the Samsung Galaxy S-III, were Russell Simmons, Johan Lindeberg, Lou Reed, Kathy Najimy, Padma Lakshmi and Darren Starr.

Logan Lerman, who stars as the title Wallflower of the movie, said he was drawn to author Stephen Chbosky’s writing. “He created such a challenging role for a young actor,” he explained. “I went to Beverly Hills High School. I was just another kid. I was acting and I would leave occasionally. Towards my senior year, I was like ‘F–k it, I’m gone.’ I wanted to start working professionally.”