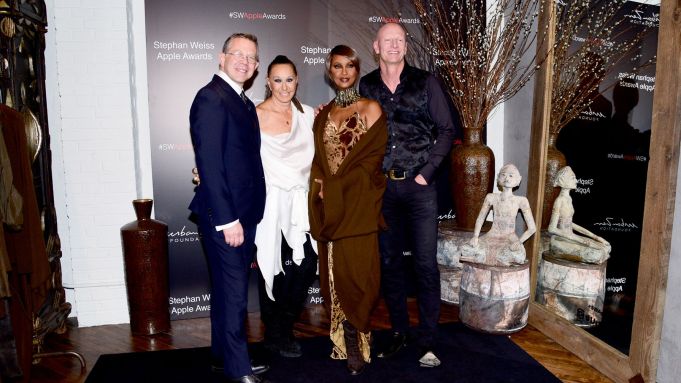 “I want to see what’s going on in there!” Donna Karan yelled from inside her Urban Zen store on Greenwich Street in New York’s West Village on Tuesday night. “I want to go to my own party. But I have to work.”

Karan was, in fact, hard at work giving hugs and kisses, taking photos and answering questions from reporters at her fourth Apple Awards — a dinner and cocktail hour hosted in honor of model Iman, photographer Jimmy Nelson and executive dean of Parsons Joel Towers. The trio received accolades for the respective work they’ve done in fashion, the arts and education.

Nelson’s photographs — mostly depicting the members of tribal communities in South America, Africa and Asia — were blown up, framed and hung on the walls of the Stephan Weiss Studio event space, where the party was held. (It’s right next to Urban Zen, by the way.) Nelson’s book “Homage to Humanity” was on display at the party as well. He said there will be a collaboration between him and Urban Zen coming very soon.

Iman, who had a short, cropped golden hairdo, wore a velvet dress she said was “at least 30 years old.”

“I don’t know how I fit in it, but I fit in it,” she marveled. Meanwhile, Towers circled the room, with his signature wire-rimmed glasses and one earring. He said many students come to Parsons wanting to be the next Donna Karan.

“The message Donna sends to our students is: fashion has changed,” he said. “Looking backward toward the success of our predecessors is not how fashion will be successful in the future. It’s all about collaboration, all about working across cultural and disciplinary boundaries.”

Keith Richards walked by with his sunglasses and a fedora on. Christy Turlington Burns, in chandelier earrings, took photos holding a black-and-gold sign that said “Vote,” which Karan handed and showed to nearly everyone in attendance. Tommy Hilfiger and his wife, Dee Ocleppo, Calvin Klein and Sela Ward also came to the party.

When asked who is the one woman Karan is dying to dress in Urban Zen, whom her dream celebrity to put in her clothing would be, Karan grabbed this reporter’s head and held on tightly.

“I want to dress the woman who’s going to make it in the White House and run this country,” she said. “At the inauguration, the way I dressed President Clinton. How does that sound?”