The trio hosted an exhibit for "Nomad: Two Worlds" on Monday night. 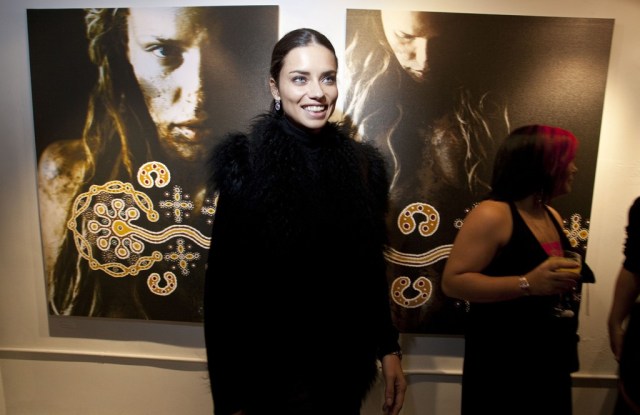 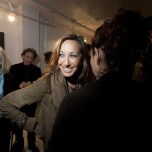 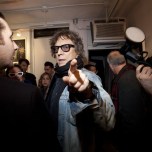 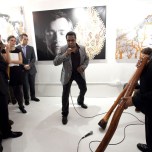 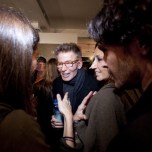 Cultures collided in Chelsea on Monday night at an exhibition of the collaborative art project, “Nomad: Two Worlds,” hosted by Donna Karan, Russell James and a very late-arriving Hugh Jackman.

James explained the genesis of the exhibition as a result of his youth in “a very divided Australia [with a] reconciliation issue, a massive divide of black Australia and white Australia.”

Guests including Adriana Lima and Calvin Klein perused the large-scale, mixed-media works while Mick Rock passed out his Christmas card. “Take one,” Rock offered, as a cohort filmed on a hand-held camcorder, “and an envelope. For the holidays.”

James gestured at a nearby canvas, which depicted a nude Miranda Kerr tangled in a tree, dotted with paint.

“We’re now collaborating with Haiti and with the Native American Society of the U.S. That piece is one of the first by a Native American artist,” he said. “I brought in celebrities that I knew into the photographs but then I thought, you know, maybe it’ll be insulting to their cultures, but the artists were like, ‘No! It’s great. I’ll tell your story. Why the hell not?’”

It is, after all, hard to imagine someone discarding an image of a nude Kerr.

While discussing her involvement with Nomad, Karan was only briefly interrupted by a performance by a pair of aboriginal men on didgeridoos who are performing in Jackman’s one-man show on Broadway. Karan explained that she had traveled the outback with James on her Australian travels.

“I visited the wonderful people, the aborigines, some of whom I know from New York, but I hadn’t ever been on their land,” she said. “So I went on their land and that’s where I broke my arm! I went in to see an elder and it was just an amazing, amazing story, but I walked out of the tent and broke my arm, and it was just…you know when something is happening in life and all the signs get shown? It was one of them.”

“No,” the designer explained. “No, everything else that happened.”