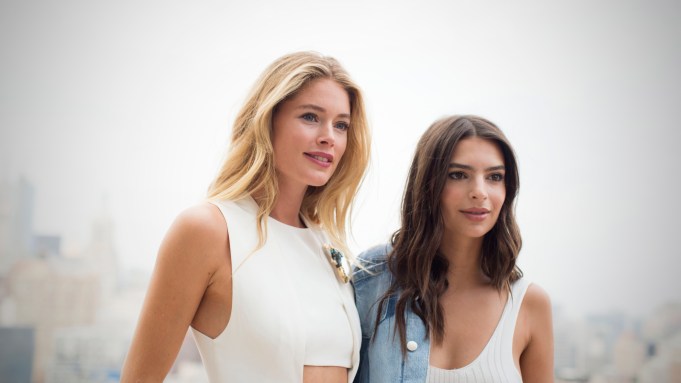 “It all started with a trip to Kenya,” Doutzen Kroes said Saturday evening from the penthouse of the Standard East Village. Together with Frederic Cumenal of Tiffany’s, she was drawing a crowd of fashion folk away from the shows for an evening cocktail in honor of the launch of #KnotOnMyPlanet, in efforts to save endangered elephants.

“My agent sent me over there, and he said, ‘You should go and check it out. You have to see for yourself,’” Kroes said. “And we started talking after both our trips and we said, ‘We have to do something, we have to change this.’”

Kroes was joined by model friends Naomi Campbell, Karlie Kloss, Joan Smalls, Emily Ratajkowski, Constance Jablonski and Lindsay Ellingson, and a man with a penchant for both environmental do-gooding and, well, models — Leonardo DiCaprio (whose support didn’t extend to doing press or being photographed).

The campaign features a Patrick Demarchelier-lensed shoot featuring Kroes and others in knotted attire. “It’s relating to an elephant’s brain — they never forget anything,” Kroes said. “We thought if human beings tied a knot, it’s a nice bridge — tying knots to not forget about the elephants. It’s so catchy and we’ve seen the proof online — it’s going crazy and everyone is supporting.”

Kroes’ desire to save the elephants stems from an emotional, personal connection to the animal. “If we don’t do anything it will be too late for our kids to see elephants in the wild. There’s nothing like it,” Kroes said. “I have studied elephants in the wild for two hours sitting there, watching them, and [didn’t] get bored. My five-year-old son, with a concentration span of, like, two seconds, was sitting there with me and my husband and that just shows how amazing they are. They’re majestic animals that we have to protect, and they’re getting killed just for their tusks. It’s insane. And there’s nobody who wants that.”

Aside from wanting her son to be able to continue to know elephants there’s also an environmental drive to their protection. “For me it’s an emotional reason to fight this but there’s also an environmental reason why we need to stop this,” she said. “Elephants are worth so much more alive than dead. They’re good for the wildlife — there are so many reasons why we should protect elephants. It’s a beautiful side of the fashion industry as well. I hope it’s an example of many more causes that we need to fight.”