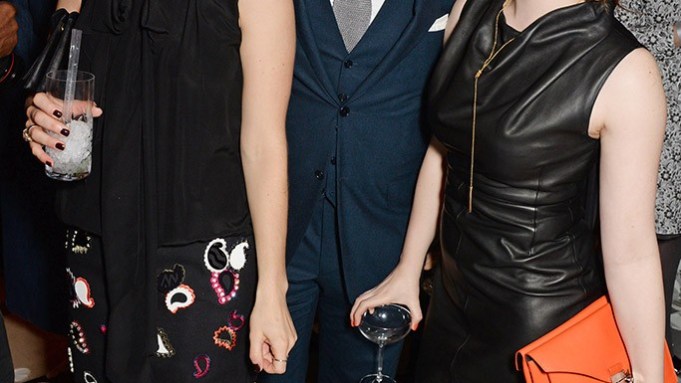 INTO THE WOODS: The BAFTAs may have been taking place on the same night, but Mulberry boasted a starry turnout of its own at a dinner Sunday with guests including Allen Leech, Lily James, Holliday Grainger, and Freddie Fox. Leech and James are filming the latest season of “Downton Abbey.”

“Our calves are coming out,” said James of the hemlines on the costumes. “And the dresses we’re wearing you could easily wear today.” Last year, James wrapped her role as Cinderella alongside Cate Blanchett, who plays her evil stepmother. The Disney film is slated for release in March 2015.

Leech said he has no plans to quit Downton, unlike some of his original co-stars. “As long as Julian [Fellowes] keeps writing, I’ll keep acting,” he said. Leech also stars alongside Keira Knightley and Benedict Cumberbatch in “The Imitation Game,” a forthcoming film about Britain’s famous World War Two code breakers.

The dinner was co-hosted by Cara Delevingne and Ronnie Cooke Newhouse, and also counted Eliza Doolittle, Kelly Osbourne, Tallulah Harlech among its guests.

It marked the launch of a new bag designed by Delevingne for Mulberry, and also featured acoustic performances by Marika Hackman and Will Heard.

Delevingne is to make her acting debut in a film called “Kids in Love,” and was also showing off her new ring made by the jewelry designer Zara Simon. She enjoined fellow guests to look closely through its tiny “eye” design at a picture of herself and her co-star Gala Gordon on the film set. “It’s epic,” she said of the ring, which was a gift form Gordon. “It’s the coolest thing I’ve ever seen.”

Karen Elson, meanwhile, said she is planning another record that’s “pretty dark and David Lynch-esque,” while Osbourne has other pursuits in mind.

She is doing a MAC makeup collection, in collaboration with her mother Sharon Osbourne, and a new fashion line. “I can’t say very much about it,” she said. “Nobody has ever done this in the fashion world before, and it’s an ‘every woman’ line, I’ve been working on it for 10 years.” Both projects are set to bow in June. She’s also starring in an undisclosed Disney cartoon, but once again, her purple lips were sealed.