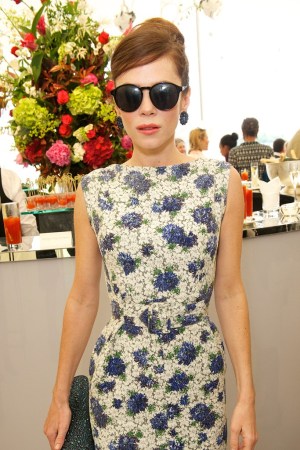 LONDON — If the low-hanging grey clouds over Cowdray Park in West Sussex failed to add a sense of drama to the St. Regis International Cup on Saturday, the tumble that St. Regis ambassador and Ralph Lauren model Nacho Figueras took over the head of his horse during the third chukka did.

The captain of the South American team, who last week played against Prince Harry at the Sentebale Royal Salute Polo Cup at Greenwich Park, was thrown over the head of his steed, which then rolled on top of him, breaking his hip.

Across the field, in the St. Regis marquee, there was a sharp collective intake of breath as he fell, which was only released after the ambulance left the pitch, bearing Figueras away to a local hospital, and play resumed. Despite the loss of its captain, the South American team beat Audi’s England team 11 to 9.

Just back from pilot season in L.A., Poppy Delevingne was in detox mode, wearing a shearling vest, skinny jeans and cowboy boots. “I am loving being in L.A. Everyone works hard and plays hard. I’m trying to get into acting, I mean, this is something that I love; it’s my baby,” she said. “We did a pilot that was almost commissioned but it was canned at the last minute because of television diversity rules. But I’ve done five video auditions this week and been sending them back, so hopefully something soon.”

Wearing a Kate Spade coat and a Goat London dress, Amber Atherton, of “Made in Chelsea” fame, also has a few TV projects in the pipeline. “One is for Bravo and is top secret, the other is with Jamie Oliver and about young entrepreneurs,” she said.

Stylist Julia Sarr-Jamois, in heart-print pants by Miu Miu and a herringbone Marc Jacobs blazer, was with boyfriend Joe Alexander, a music video director who has worked with Kanye West and The Maccabees, and who has just written his first feature film. “It’s being produced by Sarah Radclyffe, who loves overruling the director,” said Alexander. “It’s a coming-of-age, semi-autobiographical film called ‘Transmission’ that is set in the world of Nineties pirate radio.”