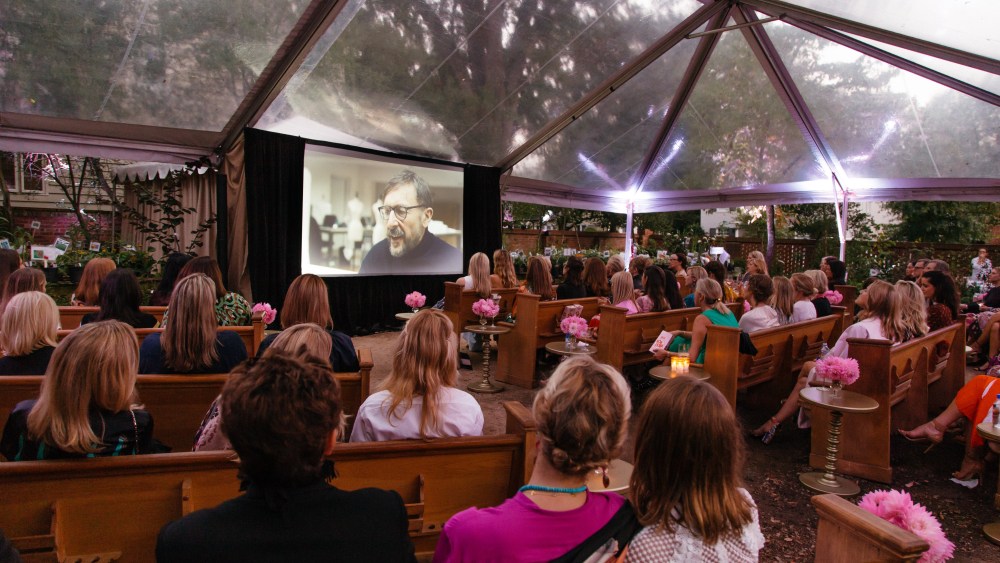 It’s been a busy week for Dries Van Noten — and his diehards. The Belgian designer traveled to New York and made rare appearances on the events circuit, hosting a book signing for “Dries Van Noten 1-100” Monday night at Barneys and a screening of his documentary “Dries” Tuesday at the Whitby Hotel, thrown by Bergdorf Goodman. On Thursday, Charlotte, N.C., boutique owner Laura Vinroot Poole put on a garden party for her loyal Dries customers to enjoy the film as well.

Monday’s signing saw a line snaking across the sales floor at Barneys as his loyal fans lined up to have a copy of his tome signed. On Tuesday, speaking of his film, Van Noten said “it’s rather strange to see myself on film, because you get in with Patrick Vangheluwe, [his partner] to see my house and my garden, which I usually keep completely private. So it’s a little bit like, oops, here we are. But on the other hand, for me the garden and the house had to be in the film, because it’s so much a part of me and my creative process. So without the garden, the film would not be complete, I think.”

His famed garden served as inspiration for Vinroot Poole, who has carried the line for the past ten years in her boutique Capitol. For her party on Thursday, she took over Wing Haven, a three-acre garden hidden in the heart of Myers Park in Charlotte that was built in the Twenties by a husband-and-wife team. Van Noten’s spring 2015 collection served as decor inspiration.

“It’s just a classic southern garden, just absolutely beautiful,” Vinroot Poole said of the space. “And one of the biggest bird sanctuaries in the city. I thought that as Dries is devoted to his garden that has been there since the 1840s, it was a natural place to have it. We had cocktails by the koi pond, then finally had the screening in the nursery, which is so cool because it has tables and tables filled with potted plants…we had 30 church pews brought in so people could sit, and popcorn and Champagne…it was just spectacular. I didn’t want to leave.”

Vinroot Poole was motivated to host a party for her customers given the success she’s found with the line in the south. “It’s very intellectual…what he does, nobody else in fashion does,” she said. “Dries is something I’ve never edited out of my clients’ closets because it’s so in its own world. It’s like from outer space. Dries is so modern and forward, and I think the thing that really resonates with my clients is that you really look like yourself in it. His clothes you can interpret however you wish.”

With contributions from Kristen Tauer