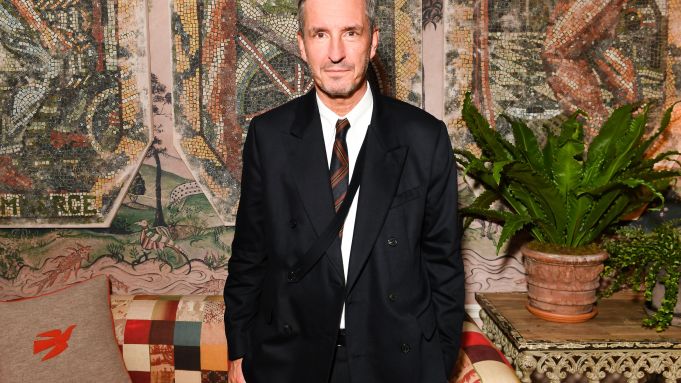 On Tuesday night, Dries Van Noten sat captive in the second row at the Whitby Hotel’s basement movie theater. As part of a busy visit to New York, which has also included a signing of his two-part retrospective book of his past 100 collections, the designer was attending the premiere screening of Reiner Holzemer‘s documentary “Dries,” which looks at his creative process. An intimate cluster of editors and devout customers came out for the first look, which was hosted by Bergdorf Goodman.

“But of course on one side I like to look back, but on the other side, for me, it’s the past. Most of the time I’m just busy looking to the future, the next collection,” said Van Noten after the screening. “That’s the good thing and the bad thing about fashion, it’s always like, next, next, next. It’s four times a year and it’s a lot. But it’s what gives us the drive.”

Known to be rather private, the designer offers a look into his personal sphere for the film. “It’s rather strange to see myself on film, because you get in with Patrick Vangheluwe, [his partner] to see my house and my garden, which I usually keep completely private. So it’s a little bit like, oops, here we are,” said Van Noten. “But on the other hand, for me the garden and the house had to be in the film, because it’s so much a part of me and my creative process. So without the garden the film would not be complete, I think.”

Speaking of the garden. “For the moment it’s really like autumn, so we have grown the last vegetables. But I really want to, as long as I can, eat from the garden,” he said, adding that the freezer lets him enjoy his backyard harvests throughout the winter months. “For now we have all of the cabbages and things like that,” he added. “And pumpkins, of course.”

Despite such a busy schedule, Van Noten is hoping to fit in a trip to the Whitney Museum before heading back to Belgium later this week. If not, he’ll be back in town next week. “I would love to see the Calder exhibition, in movement,” he said, referring to the museum’s show highlighting Alexander Calder’s kinetic works. “I know the photos, a few films of it, but I’ve never seen it [in person]. That’s really on my wish list.”