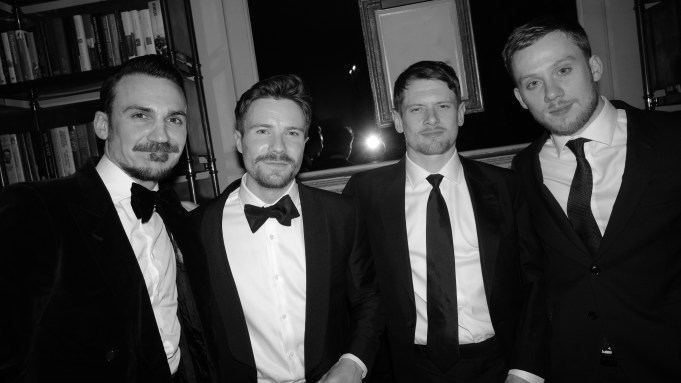 STARS ALIGN: Liv Tyler, Stanley Tucci and Chanel muse Ellie Bamber, who played Cosette in the BBC’s production of “Les Misérables” were among the guests at an intimate dinner hosted by dunhill at Bourdon House ahead of the BAFTA awards on Feb. 10.

The dinner turned the spotlight on British actors and filmmakers, with the “Kingsman” cast, Taron Egerton, Edward Holcroft and Mark Strong, among the guests in attendance. The dinner was also a mini-reunion for the cast of “Skins,” with actors Jack O’Connell and Joe Dempsie, who plays Gendry in “Game of Thrones,” dancing well into the night in their dunhill black tie.

Dempsie confessed that it’s rare to find him in a suit. “I only wear them on special occasions and dunhill is my go-to brand; I own six bespoke suits from them,” he said.

Breakout star Ncuti Gatwa, from the newly released Netflix series “Sex Education,” was nearby posing for pictures. He said he was curious to find out, along with many viewers, whether his character Eric Effiong will actually end up with his love interest Adam Groff, played by Connor Swindells, in the upcoming season.

There were also a number of emerging British talents at the event.

Clifford Samuel from the BBC show “McMafia” said he has a new TV show coming out called “Gone: A Windrush Chronicle,” while Kingsley Ben-Adir from TV show “King Arthur” said he would be joining the second season of the Netflix show “The OA” as well as making his debut at the upcoming season of the highly praised TV drama “Peaky Blinders.”

The dunhill event got everyone into a party mood ahead of the big event on Sunday, and showed a whole new side to dunhill. “We are not an old stuffy English brand anymore,” said Mark Weston, creative director of the brand. “dunhill nowadays is about bringing a fresh, elegant and diverse spirit to the men’s wear world.”