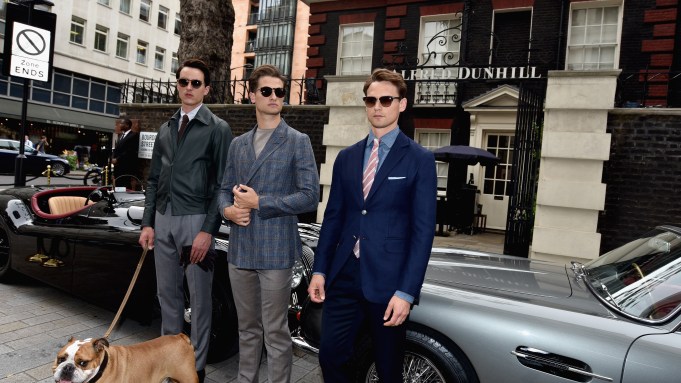 LONDON — “If I was a betting man, my money would be on (Michael) Fassbender for Bond,” said “The Hobbit” and “Poldark” actor Aidan Turner at the Dunhill summer party. Was he aware that the bookies’ odds on him being made into Ian Fleming’s legendary superspy had been slashed to odds on favorite at one-half. “Really? No, I had no idea, that’s crazy. I think Fassbender would be great, but then they’re still saying Tom Hiddleston will get it — but I think he’d make a better villain. Tom Hardy would be good, too. Whoever they choose, it will be a total surprise. They always go in a totally unexpected direction.”

It may have been absent from the London Collections: Men show schedule this season but Dunhill kept a hand in the game by throwing a party to launch its new eyewear collection with a screening of a short film depicting irreverent takes on British driving etiquette. The film can be seen at Dunhill.com.

Joe Dempsie, who plays Gendry in “Game of Thrones,” was remembering his audition for the role. “It was the worst audition of my life,” he said. “It was the first time I had all of the producers in one place at one time and they kept telling me they couldn’t understand a word that they were saying with my [Nottinghamshire accent], so I was properly surprised when I won the role.”

He wasn’t the only one. “I called my friend, who is a ‘Game of Thrones’ superfan, and told him I’d got the role and he just couldn’t understand why I had been given the role because I look so different to Gendry; he’s this huge strapping bloke and I’m just not. They said, ‘Whatever you do it’s fine, but when you come back be bigger,’ so I had to spend a lot of time in the gym,” he said. “I called Nicholas Hoult, who had just got the role in ‘X-Men’ and asked him if he’d had to start beefing up for the role. And he said, ‘Yeah, its crazy, I’ve been given a car to Pinewood Studios every single day and I go to the gym with a personal trainer, who gives me a protein shake and then sends me on my way.’ I was so jealous; I had to fund the whole thing myself.”

Also at the party was Hollywood lifestyle consultant Andrew Weitz, who had just landed from L.A. “I had a nightmare journey. There was a fire on the Heathrow express, so I had to get The Tube, which lost power, so it too me an age to get to my hotel, The Mondrian,” he said. “But I did get to eat some caviar on my flight, so it wasn’t all bad.”

Also at the party was Diet Coke model Andrew Cooper and vlogger Jim Chapman, who tucked into a tub of ice cream from the vintage Isle of Wight.