The Sunday night fete played out more like a carnival than your typical fund-raising gala.

By Lauren McCarthy on May 5, 2014
View Slideshow 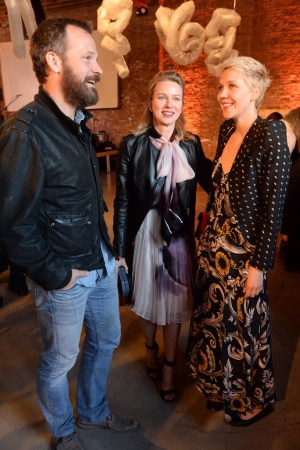 And while no bearded ladies made an appearance, a majority of male guests showed off their own bushy facial hair — including a late arriving Jake Gyllenhaal, and the man of the hour, the artist and Pioneer Works founder Dustin Yellin. “I’m very excited that all these people came together to learn and celebrate what Pioneer Works is doing,” he said, surveying the newly opened and now crowded garden area. “I mean, this was a derelict parking lot.” Finishing the last drag of her cigarette at a nearby picnic, Jemima Kirke sauntered over to introduce a friend to Yellin before being ushered inside for dinner, catered by the Fat Radish.

Guests noshed on family-style salads before overloaded trays of freshly grilled meat were presented. “This was a 1,000-pound cow that we roasted outside in the garden,” explained the chef. “Her name was Peggy.” The event’s resident vegetarians and vegans instinctively grimaced before reaching for a second heaping of salad. “I think I would have preferred not to know that,” said one grinning carnivore, digging into a heaping slice of meat. “Oh well — Peggy is delicious.”

Post-dinner, guests congregated in the main room for a performance by Ariel Pink and DJ sets from Chances With Wolves, MGMT and Mike D. Liv Tyler, dressed in printed Proenza Schouler and flanked by the designer duo, switched into concerned-mother mode for a moment.“I said I would be home by nine,” she explained. The clock noted 8:48 p.m. “Oh, never mind. Milo’s happy. They are about to play Head’s Up, boys versus girls….So, what time does Ariel go on?” Party on.